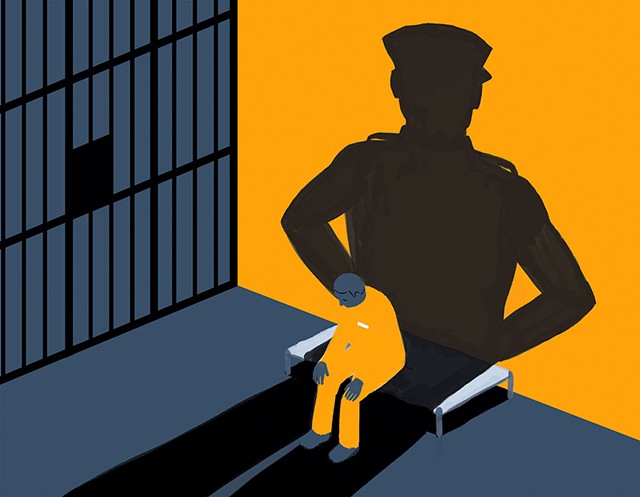 A Vermont inmate at Camp Hill prison in Pennsylvania said he was placed in “the hole” as retaliation for writing to Seven Days about his experience there. He is not the first Vermont inmate reported to have spent more than 30 straight days in segregation in Camp Hill despite a Vermont law against exceeding that amount of time.

Jabbar Chandler, serving time for his involvement in a drug-related robbery in 2014, wrote to Seven Days in December about the circumstances surrounding the death of a fellow inmate, Herbert Rodgers. A January 31 story in Seven Days quoted the letter from Chandler in which he described guards telling him that it “wouldn’t be smart” to contact the media about Rodgers’ death, and there would be “consequences.”

Seven Days was unable to independently verify his account, but Vermont corrections officials said they are in Pennsylvania this week reviewing the claim.

In a letter sent in late March to Montgomery attorney Barry Kade, who advocates for inmates, Chandler said he believed he was placed in segregation in retaliation for writing to the media. Kade shared the letter with Seven Days, the Vermont Department of Corrections and two lawmakers after consulting Chandler’s mother.

“It seems that everything has gone downhill for me ever since I decided to submit that letter to (7 days) Seven days, but it is what it is,” Chandler wrote.

'Camp Hell': Vermont Inmates Report Threats by Guards in Pennsylvania
By Taylor Dobbs
Crime
“Since [writing to Seven Days], I’ve been placed in ‘the hole’ (pending investigation) until I reached the maximum amount of days they are allowed to detain me (30), then placed on … administrative segregation, which lasts as long as they want it to,” he wrote.

Wool, a vocal critic of the Vermont and Pennsylvania DOCs, said situations like Chandler's make other inmates reluctant to speak out.

"So many guys are so fearful of retaliation they do not want their names printed," Wool wrote. "I try to reassure them saying no one files anywhere close to letters of complant [sic] and lawsuits than me and im [sic] okay."

Wool said his clean disciplinary record makes him safer from retribution than some other inmates.

Chandler's letter to Kade said Pennsylvania policy calls for prison officials to notify inmates about allegations of misconduct against them within 30 days, and that never happened.

“[T]hey have to issue you a misconduct (write-up) or release you back to general population and they didn’t do either,” he wrote.

Vermont state law limits the use of “disciplinary segregation” of inmates to 30 consecutive days, but Pennsylvania officials say they’re not required to follow that law. Emails show Vermont officials have discussed the issue with Pennsylvania authorities since November.

Camp Hill superintendent Laurel Harry acknowledged in a November 27 email that Vermonters were probably being placed in segregation for more than a month, but seemed unaware of Vermont’s law banning that practice.

“I know some of your VT inmates have had serious misconducts (i.e. cell phones, drugs, inmate fights, etc.) and I would imagine that they have indeed received more than 30 days,” Harry wrote to a Vermont DOC official. “Are you stating that it is VT law that they cannot be housed in disciplinary custody for more than 30 days?”

In an email to Seven Days Monday, Pennsylvania DOC spokesperson Amy Worden said the department is on solid legal ground. Worden wrote that Pennsylvania’s obligation under the agreement between the states is to avoid imposing any “type of discipline prohibited by the laws of the sending state.”

Worden wrote that Vermont law allows disciplinary segregation, so Pennsylvania can use it.

“[T]here is reference to the ‘type’ of discipline” in the agreement between the states, Worden wrote. “But that does not preclude the receiving state from imposing any duration of accepted discipline that aligns with its policy.”

Worden declined to comment on the specifics of Chandler’s case, but noted that inmates are allowed to communicate with members of the news media.

"[R]egardless of our differing opinion on the law, VT DOC does not support disciplinary segregation greater than 30 days," Menard wrote. She said Vermont DOC staff will ask Chandler to sign a release allowing state officials to speak with a reporter about the details of his case.

Vermont DOC facilities operations manager Shannon Marcoux wrote in an email that he is “aware of the concerns that Mr. Chandler has brought forth.”

Without discussing specifics of the case, Marcoux said he was “actively reviewing [Chandler’s] claims to include on-site assessments of VTDOC staff at Camp Hill [this] week.”

Vermont's Department of Corrections is seeking a new contract to house the more than 200 inmates who can't fit within Vermont's in-state prisons, and Menard said officials plan to address the use of segregation in that contract. Human Services Secretary Al Gobeille has said Vermont officials want more control over how Vermont inmates are treated than they have under the current agreement with Pennsylvania.