A Kentucky-based hemp company has purchased a Middlebury food-processing facility as part of an expansion into the Northeast.

Victory Hemp Foods bought the facility from the Full Sun Company in February, the two sides confirmed Thursday. Full Sun, which opened in 2014 and produced cold-pressed canola and sunflower oils, shut its doors last August, according to company cofounder Netaka White. The deal with Victory Hemp, based about 40 miles outside of Louisville, Ky., came together in the following months, a bittersweet moment for White, an entrepreneur who lives in Salisbury.

“Sales lagged consistently,” he recalled. “We were successful in raising money to keep operations going and expand the business, but [there was] not enough money, not enough time to get Full Sun where it needed to be. Eventually, the decision was made to pull the plug.”

New owner Chad Rosen said he’s eager to expand his line of cold-pressed hemp oil and hemp protein powder to the Northeast. One of his first hires was White, who is familiar with the equipment in the 7,500-square-foot facility and will serve as production manager.

“We’re keeping some of the old blood there who kind of knows where the bodies are buried and how the equipment works,” said Rosen.

“Chris coming aboard Victory Hemp Foods is a transformative moment, for not only our company but the domestic hemp industry at large,” Rosen said.

Rosen said he came upon the Full Sun facility while chatting with organic dairy farmers in Vermont about hemp-growing possibilities.

“We found out they press seed oil with some really beautiful German equipment for sunflower seeds and they had all the infrastructure set up and it was basically ready to turn back on,” Rosen said. “And it was run by a great group of people.” 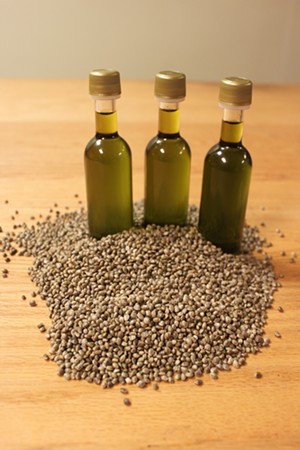 The expansion will allow Victory Hemp to produce 8,000 gallons of hemp seed oil each month. The byproduct of that extraction process is turned into about 50,000 pounds of hemp protein powder, which is used in all sorts of products, Rosen said. Victory Hemp’s products are found in Kroger supermarkets and Whole Foods Markets in Kentucky, Rosen said, and should be on shelves in Vermont in late spring or early summer.

Rosen cautioned that he's not creating cannabidiol, a hemp extract known as CBD that's gained popularity for its supposed medical benefits. Rather, his products use the hemp seed, which doesn't contain cannabidiol. He described it as a "white, nutty seed that tastes like sunflower seeds" and is renowned for its high omega-3 and omega-6 fatty acid content.

Rosen is contracting with some Vermont hemp farmers, but is also planning to buy from producers in New York and Maine. He spoke of the need to have "processors close to your producers" and lauded the "forward-thinking mindset in Vermont that has embraced our model to add another piece" to the state's "really valuable agricultural market."

White said he’s looking forward to his new gig. He described it as coming full circle: His first business enterprise was a hemp apparel company. He said Full Sun originally planned to cold-press hemp seed oil but had to face reality as the other two products never really gained traction in the market.

“There’s a letting go, but each day gets easier,” White said. “I’m really excited to get started making the hemp seed oil and helping Victory Hemp get a good launch here.”

Correction, April 12, 2018: A previous version of this story misstated Netaka White's role in creating Full Sun. He is the company's cofounder.