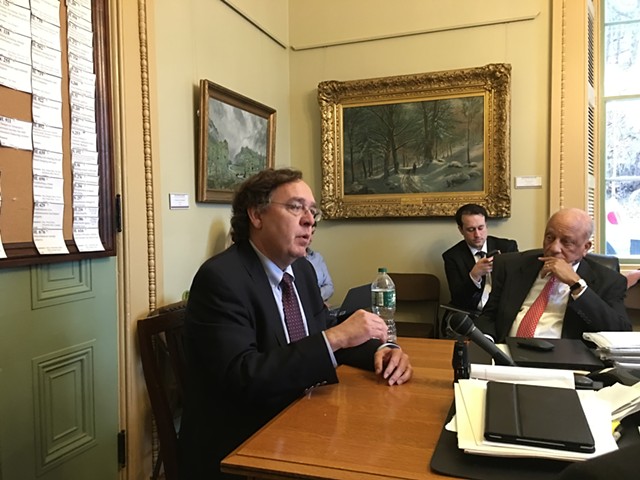 The interim chief executive of CoverageCo says the rural wireless network is still alive — and needs a little help from Vermont officials to stay that way.

CoverageCo provides 2G wireless service along 150 miles of rural highway and in 26 small communities, but it's been losing money on basic operations and is carrying an unknown amount of debt. Vermont Public Service Commissioner June Tierney told a House committee last week that CoverageCo would effectively cease operations this past weekend.

It did not, thanks to the intervention of Richard Biby, a former CoverageCo executive and telecommunications engineer who has been hired by the company's investors to lead the firm through what he hopes will be a successful recovery effort.

Biby, who lives in Virginia, has been in Montpelier since Monday, meeting with Gov. Phil Scott, administration officials and key lawmakers, pitching a plan to keep CoverageCo in service while a long-term recovery plan is worked out.

Doing so, he told the Senate Finance Committee on Wednesday, would require state assistance on two fronts: providing relief from E-911 geo-location charges and convincing AT&T to participate in CoverageCo's service. "I believe the revenue would come much closer to, if not exceed, our break-even point" if those things happened, Biby said.

He got a cautiously favorable hearing from the committee. "If we let this die on the vine, it's hundreds or thousands of Vermonters without 911 cell service," noted Sen. Randy Brock (R-Franklin). If the service goes dark, he said, "Just wait until a couple of people die because there's no coverage."

CoverageCo pays about $96,000 per year for its participation in the E-911 network. Biby argued for having the state's Universal Service Fund, which is aimed at providing telecommunications service to everyone in Vermont, pay that bill.

That would close about half of CoverageCo's revenue gap. The other half, said Biby, could be earned from AT&T if the state could convince the carrier to participate in his company's service, as every other major wireless carrier has done. For non-AT&T carriers, CoverageCo earns a portion of roaming charges for every call made in its service area.

"We don't know exactly how much of roaming traffic is AT&T," Biby said. But he added that nearly 90 percent of 911 traffic through CoverageCo originated with AT&T phones. If AT&T's share of all CoverageCo traffic is anything close to that, then Biby's firm is missing out on a lot of potential revenue — he estimates about $100,000 per year.

"That doesn't solve our long-term issues," he said, "but it would keep this network up and operational and at least breaking even."

Biby denied suggestions that AT&T's system was incompatible with CoverageCo's." AT&T worked with CoverageCo to set up microsites in Puerto Rico [after Hurricane Maria]," he noted. "One heck of a lot of calls were placed on that network."

Biby acknowledged that these two steps would only provide breathing room for a deeper assessment of the business. Speaking as not only CoverageCo's interim CEO but as one of its investors, he said, "We're committed internally that we're good for at least three months, and if we're seeing positive progress by the state partners, then we can extend that runway."

Biby has gotten a "positive" reception in his meetings, he says, but no immediate action. After the Finance Committee hearing, Brock said that Biby's plan "appears to be a viable solution, but I want to hear from everybody else ... What's imperative is that we have a plan. And right now, we don't."
Prev
Next