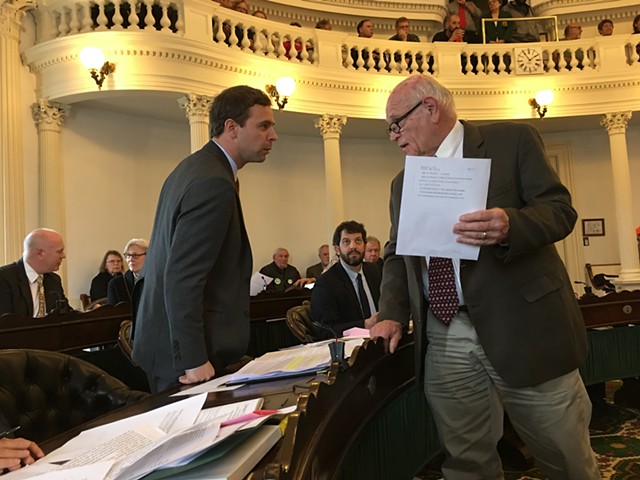 By a 17-13 vote Friday afternoon, the Vermont Senate gave final legislative approval to S.55, a wide-ranging package of gun restrictions. After final review by the legislature's legal team, the bill will go to Republican Gov. Phil Scott, who said after the vote that he would sign it, assuming it passes routine muster by his chief counsel.

"I have every intention of signing it," Scott said. "I made a commitment that I want to do everything we can to provide our citizens with the safety they deserve."

Earlier in March, the Senate approved a version of S.55 that required universal background checks for gun purchases and a 21-year-old minimum age for gun purchases. The House then amended the bill to include a ban on bump stocks and limits on gun magazine capacity.

The latter sparked some opposition in the Senate — most notably from Sen. Dick Sears (D-Bennington), who was the original sponsor of the bill. In the end, he voted against it because of concerns about the magazine provision and a hasty approval process in the House.

The final round of debate on S.55 took less than two hours, and appeared to be more theater piece than free discussion. The vast majority of senators never spoke; only two amendments were offered, and one was quickly disposed of; and after the vote, there was a general acknowledgment that the outcome was known from the start.

On Friday morning, the Senate Judiciary Committee — chaired by Sears — made a number of amendments to the House version of S.55. The most noteworthy would have eliminated the magazine limits. The Senate debate, originally scheduled for late morning, was pushed back by 90 minutes. The delay appeared to allow time for some backroom dealmaking to prevent an overlong or untidy floor process.

The debate began with Rodgers, a gun owner and fierce advocate of gun rights, offering an amendment of his own. It would have stripped out the magazine limits and the increase in the legal age to purchase guns. Sears then offered a substitute amendment reflecting his committee’s morning work. Senators voted unanimously to scrap Rodgers’ offering — even Rodgers himself voted against his own amendment — and moved on to consider Sears’ amendment.

Sears expressed doubts about the enforceability of magazine limits. He also objected to what he called “errors” in the House bill due to an overly hasty process.

Rodgers provided the verbal pyrotechnics. “If we pass this bill, maybe it’s over,” he said. “Maybe the Vermont I grew up in is gone.”

That was just a warmup. Rodgers bemoaned the influx of outsiders “who came to take away that Vermont.” He then launched into an apocalyptic vision of a future where Vermont is overrun by climate-change refugees: “I wonder where all the folks from New York City will go when it’s underwater,” he said.

Rodgers cited the 40-plus conflicts going on around the world, the threats of terrorism, authoritarianism and natural disaster. “If chaos erupts and bad people invade my house,” he asserted, “I’d rather have a 30-round magazine than a 10-round magazine.”

Sen. Joe Benning (R-Caledonia) offered a calmer approach, arguing for passage of Sears’ amendment as a way to keep the discussion going. Had the Senate approved Sears’ version, then the House and Senate would have had to form a conference committee to work out the differences between the two bills. “The Senate is a contemplative body,” Benning said. “We should rise above the passions of the moment.”

The Sears amendment was defeated 18-12. There was a moment of surprise when both Rodgers and Starr voted against Sears, whose head spun around when Rodgers cast his vote. Sears glared at the two Northeast Kingdom seatmates for a moment and shook his head.

The Senate then turned to the House version of S.55.

Senate President Pro Tempore Tim Ashe (D/P-Chittenden) pointed out that most of Sears’ changes were additions to the House bill, not mere corrections, and added: “If the bill moves on and is signed by the governor, there will be opportunities to fix it.”

As the debate wound down, Sears asked if his name could be taken off the bill, which listed him as the sole sponsor. After a brief recess and a senatorial huddle, he was told that his only option was to withdraw the bill entirely. He declined to do so.

“I knew all along I could have made a motion to withdraw the bill,” Sears said after the final vote. “It would have been like a nuclear option. I wouldn’t do that to my colleagues.”

At that point, the final tally was a formality.

Afterward, Sears acknowledged the historic nature of the moment. “This is the first step on gun control in Vermont that I’ve seen in my time here,” he said. “We’ve done a lot of things to get guns out of the hands of people who shouldn’t have them, but we’ve never taken a step at what I consider gun control.”

Gov. Scott, in a brief media scrum after the vote, acknowledged that passage of a bill like S.55 would have been unthinkable as recently as two months ago. But then came the Parkland, Fla., school shooting, followed almost immediately by an extremely close call in Vermont. The police affidavit in the latter case, with its detailed depiction of a young man’s preparations to conduct a mass shooting, changed the governor’s mind.

“After reading the affidavit and coming to the conclusion that we weren’t insulated from this type of horrific incident, that this could happen in Vermont, I made a commitment to keep an open mind, let the legislative process work,” Scott said.

“What’s being passed at this point in time doesn’t intrude on the Second Amendment,” he added. “It doesn’t take away their guns, and I believe that we will get accustomed to the new normal.”

Two other gun bills are both a single legislative step away from the governor. H.422 would allow police to confiscate weapons after an arrest or citation for domestic violence. S.221 would allow judges to issue extreme risk orders, which would allow removal of weapons from anyone deemed an imminent danger to themselves or others.

Scott said the next chapter in preventing gun violence is a suite of school safety and mental health initiatives currently being considered by the legislature.

“It’s not just about guns,” he said. “There’s an undercurrent of violence in our country that we have to address.”