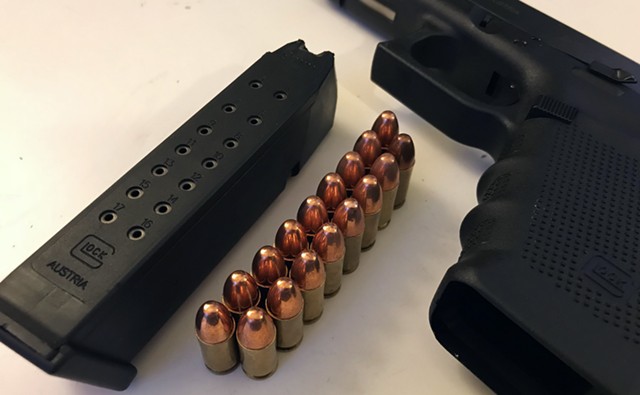 “The policies in this bill will keep firearms away from those who intend harm and reduce the lethality of firearms that may be misused,” said Rep. Martin LaLonde (D-South Burlington), who spent much of the day responding to questions and criticism from the bill’s opponents.

House Republicans vocally opposed much of the bill, arguing that it would be ineffective, unconstitutional, unduly burdensome on law-abiding Vermonters or some combination of the three.

“We are passing legislation today that does nothing, because it’s going to make a few people feel good,” said Rep. Patrick Brennan (R-Colchester).

Brennan’s criticism of the legislation hinged on enforceability and practicality. He said a provision to ban bump stocks, which increase the firing rate of semi-automatic rifles, wasn’t practical.

“I am concerned that by a stroke of the pen here we are ... immediately creating criminals,” he said. “And should they hold onto it, should they throw it away, should they drop it off at the local law enforcement office?”

Brennan and other Republicans voiced opposition to limits on magazine capacity, universal background checks and raising the purchasing age, all on the grounds that the proposals would be easy for criminals to overcome.

Rep. Anne Donahue (R-Northfield) argued that the age increase amounted to discrimination. She suggested it might not be so politically appealing to the House in other forms.

“How many people in this body would support the idea that to avoid an impulsive decision that might be regretted later, a woman who was 18 or 19 or 20 should be required to get some counseling before deciding to have an abortion?” Donahue asked.

As debate wore into the evening, Rep. Valerie Stuart (D-Brattleboro) expressed frustration with questions posed by the bill's opponents. (LaLonde said some of Brennan’s hypotheticals “stretch credibility.”) Stuart told the story of her daughter's friend, whom she described as a beautiful, 10th-grade athlete, filled with promise but struggling with mental health issues.

“My first year [at the Statehouse], in January, I got a call,” she said. It was about her daughter’s friend.

“She blew her head off in her basement while her sister and her boyfriend were upstairs,” Stuart said, her voice breaking with emotion. “And her mother had to see the helicopter turn around after it took off from Brattleboro Memorial Hospital, because this beautiful young woman … had blown off her head.”

Stuart apologized in advanced for the graphic story, but her message was intended to stir action. “Let’s cut to the chase,” she said. “Let’s get something positive done.”

Just before the final vote of the night, Minority Leader Don Turner (R-Milton) said he supported taking action to reduce gun violence but did not support the legislation at hand.

“I don’t think this bill is going to change one thing,” he said. “I hope it does.”

Votes on the bill were split up and taken by roll call. House members voted:

The House is set to debate the bill again next week, consider more amendments and vote on final passage. Then the legislation would return to the Senate, which passed a more limited version earlier this month, without magazine capacity limits or the bump stock ban. Gov. Phil Scott, a Republican, has expressed support for elements of the bill.