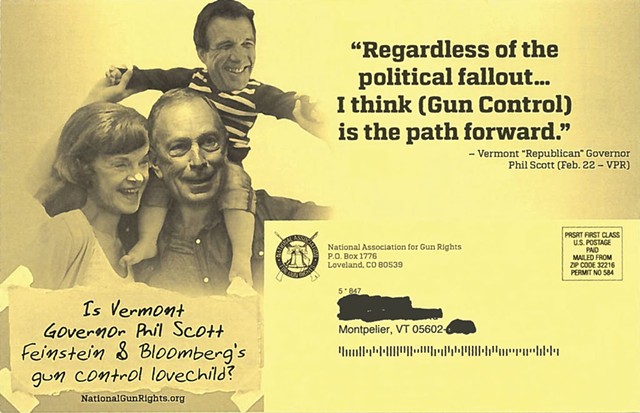 The National Association for Gun Rights mailed postcards to Vermonters this week attacking Republican Gov. Phil Scott for embracing new gun control proposals. The Colorado-based group urged recipients to call the governor and ask him to veto S.55, a gun control bill that passed the Vermont Senate earlier this month.

The postcards feature a doctored photo of a childlike Scott sitting on the shoulders of former New York City mayor Michael Bloomberg, who stands beside Sen. Diane Feinstein (D-Calif.) — both outspoken advocates of new guns laws.

A lifelong proponent of gun rights, Scott changed course last month and embraced certain gun-control proposals following a school shooting in Parkland, Fla., and a foiled plot closer to home, in Fair Haven. But according to his spokeswoman, Rebecca Kelley, the NAGR postcard distorts the governor's views.

"It’s this type of misleading propaganda that’s so destructive to the work being done to better protect our kids and communities, and the governor will continue to exhibit bold leadership that keeps our kids safe without infringing on constitutional rights," she said in a written statement. 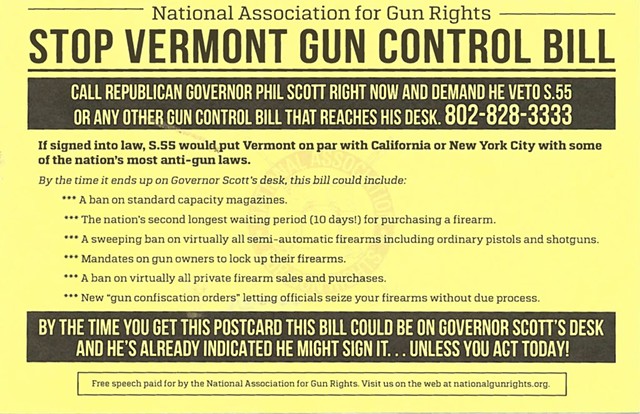 Kelley noted that NAGR mischaracterizes the scope of S.55. The postcard suggests the legislation "could include" new "'gun confiscation orders' letting officials seize your firearms without due process" and "a ban on virtually all private firearm sales and purchases." Vermont lawmakers have proposed no such thing.

It also raises the specter that provisions already abandoned by a House committee — such as a 10-day waiting period for firearm purchases and a ban on sales of "semi-automatic" firearms — could become law.

S.55, as passed by the Senate, raises the firearm purchase age to 21 and requires background checks before private gun sales. The House was debating those measures Friday afternoon — as well as ones that would ban the sale of high-capacity ammunition magazines and so-called bump stocks.

"It's very divisive, and it causes people to stop having a democratic conversation," she said. "I don’t like it."

NAGR may also be running afoul of Vermont’s lobbying statutes.

According to Will Senning, director of elections and campaign finance in the Secretary of State’s Office, “there is little doubt” that the postcards constitute lobbying because “they are soliciting others to communicate with legislators or administrative officials to influence legislation.” But NAGR has not registered as a Vermont lobbyist employer, a step that is required within 48 hours of spending $500 or more on such activities.

Organizations are also required to file expenditure reports within 48 hours of spending $1,000 or more on advertising designed to “influence legislative action.” NAGR had not done so as of Friday evening.

The group did not respond to a request for comment.