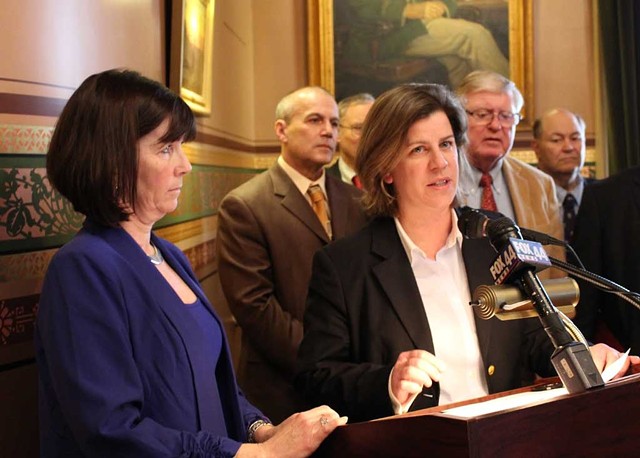 The bill, which passed 85-54, would shift $59 million in education funding from the property tax to the income tax. It would also cause tax rates to increase faster in school districts that spend more than about $12,000 per student, with the goal of discouraging high spending in future years.

Calling on her colleagues to be bolder, Rep. Heidi Scheuermann (R-Stowe) proposed an amendment that would have dramatically expanded the proposal, shifting about $120 million from the property tax to the income tax, among other changes.

“This is our chance to do something meaningful,” Scheuermann said. While many lawmakers complain that the current system is convoluted and contributes to high education spending, attempts to overhaul it have invariably failed.

Scheuermann's proposal, which was defeated on a 51-90 vote, closely resembled an early version of the bill that the Ways and Means Committee had previously ditched because it would have increased tax bills for low- and middle-income residents in high-spending districts.

Proponents of the version that passed argued that the changes would lay the groundwork for more sweeping measures in the future. “You never know what seeds planted now will grow into beautiful trees in the future,” said Rep. Cynthia Browning (D-Arlington).

The bill would enable "a significant and important shift" in education financing, said Rep. Dave Sharpe (D-Bristol), who chairs the House Education Committee. “This creates a pathway to get to where we’d like to be in the future.”

Scott, however, may stand in the way. The governor, who has repeatedly said he won’t support any increases in taxes or fees, reiterated his opposition to the changes in a statement released ahead of the vote. “Reducing property tax bills only to make up the difference by collecting more from Vermonters’ paychecks is not what they’ve asked for and it is not relief,” he said.