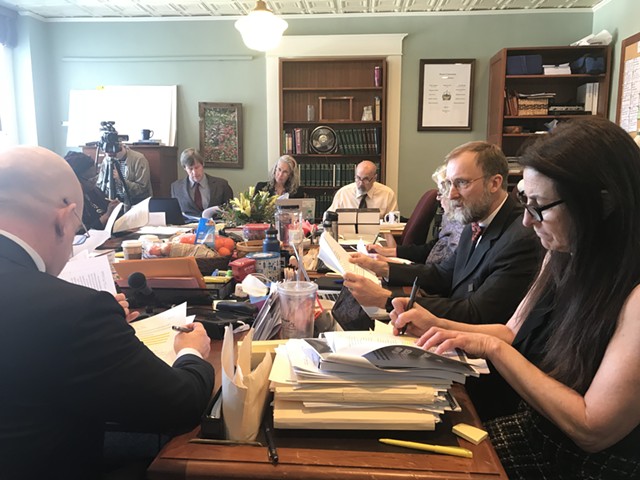 The House Judiciary Committee narrowly approved a major piece of gun legislation Wednesday. The bill would mandate background checks for all private gun sales, raise the gun purchasing age to 21, ban bump stocks that speed up the firing rate of guns and put a 10-round limit on ammunition magazines.

It passed the committee in a 6-5 vote, with all four Republicans on the panel and Rep. Chip Conquest (D-Newbury) opposing the legislation.

After the vote, Conquest explained that he supports parts of the bill, such as raising the gun buying age to 21 and a ban on bump stocks like those used in the Las Vegas shooting last year.

“Some of the provisions in there seem narrow and tailored to address particular issues,” Conquest said, adding that broader measures such as universal background checks and limits on magazine capacity would limit gun rights without substantially increasing public safety.

Two Republicans on the committee, Rep. Janssen Willhoit (R-St. Johnsbury) and Rep. Eileen Dickinson (R-St. Albans), voted in favor of portions of the bill but against the overall legislation.

Both voted for the bump stock ban and a provision in the underlying bill supported by Second Amendment advocates that would establish a legal method for police departments to get rid of guns they have in storage that aren’t evidence.

Before legislators left Montpelier for the Town Meeting Day break, the House passed a separate bill that would allow police to take guns away from the scene of an arrest for domestic violence. That legislation would also create a court process empowering police to take guns away when a judge deems a person to be an “extreme risk” to themselves or others. The Senate is reviewing that bill.

The Senate has already approved universal background checks and an increase to the age for gun purchases. Now that the House Judiciary Committee has added a bump stock ban and magazine capacity limits to that bill, it’s headed to the House floor for a vote expected Friday.