Burlington Students Walk Out, Speak Out Against Gun Violence | Off Message

Burlington Students Walk Out, Speak Out Against Gun Violence 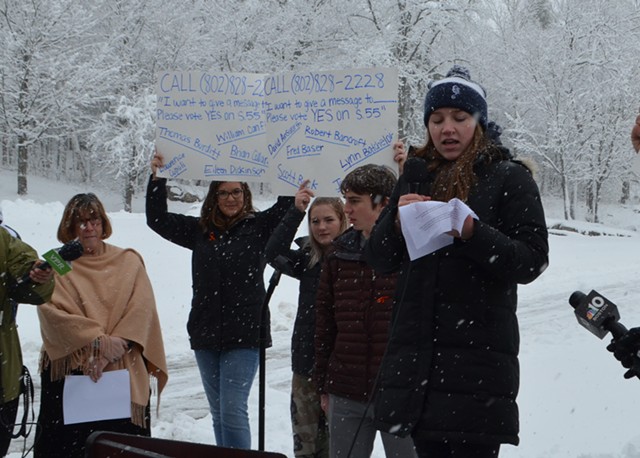 Burlington High School students walked out of class in the driving snow Wednesday, joining tens of thousands of students nationwide demonstrating in favor of increased gun control measures. For BHS senior Allie Brown, who organized the event, the demonstration was just the first step for students to make their voices heard.

"It's so easy to get involved," Brown announced from a podium, as other students held up posters with contact information for state legislators. "Take a picture of these posters right now, make a call, and then you can keep going about your day."

The demonstration came one month to the day after 17 staff and students were killed in a Valentine's Day shooting in Parkland, Fla. Since then, Vermont has seen 10 threats reported at schools around the state, according to school safety liaison officer Rob Evans.

Vermont has also seen a rise in student activism on the issue of gun control.

At 10 a.m., the first of several hundred BHS students started pouring outside, where they huddled in front of the main school entrance as snow fell. The 17-minute protest was intended to honor the victims of the Parkland shooting — one minute for each person killed.

Students held a moment of silence; some attendees pinned orange ribbons to their jackets in solidarity.

Several speakers praised the effort and urged students to continue speaking out.
Sharon Panitch, a member of the gun control advocacy group Gun Sense Vermont, told students never to underestimate the power of youth activism. "People are asking, why now?" Panitch said, listing off a host of school shootings that haven't triggered as much public outcry. "The difference is you," she said. "You're speaking your truth and we adults had damn well better listen." 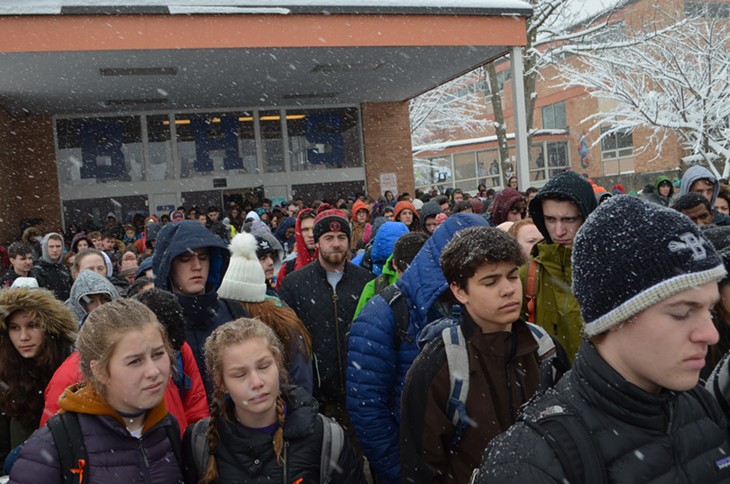 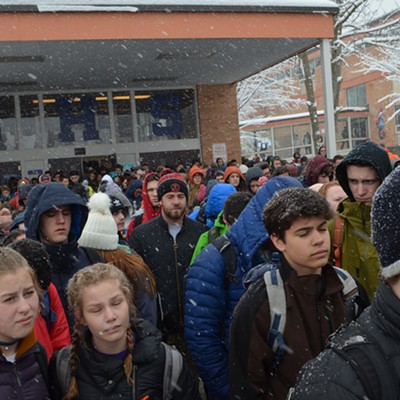 Burlington High School Walkout
By Katie Jickling
Click to View 11 slides
Burlington Mayor Miro Weinberger sent out a statement in support of the students, though he didn't make an appearance at the event.

"I applaud the leadership and activism of the students at Burlington High School, and elsewhere in Vermont, who have thoughtfully participated in National School Walkout Day and made their voices heard in Montpelier," the statement read. "Already, through their forceful arguments, these students have accomplished more in a few short weeks to move Vermont towards safer gun policies than has been achieved in decades."

As students and press gathered around the podium in front of the school, sophomore Silas Brown (no relation to Allie) asked students to continue the movement, and not just at the local and state level. He told his peers to call Vermont's congressional delegation and encourage them to advocate strongly in Washington, D.C., for increased gun control. "Let today be a call to action and not just a day of remembrance," he said.

For his part, Brown told Seven Days later that he would attend another student-led protest, the March for Our Lives rally, in Montpelier on March 24. Until then, he said he'd work to build momentum through interactions at school.

"We want to keep having these conversations," Brown said.

Several other protests were scheduled at high schools around the state, though many of those schools were closed for snow days. Some rescheduled walkouts for Thursday.