Walters: Branagan, Sharpe Will Not Seek Reelection | Off Message 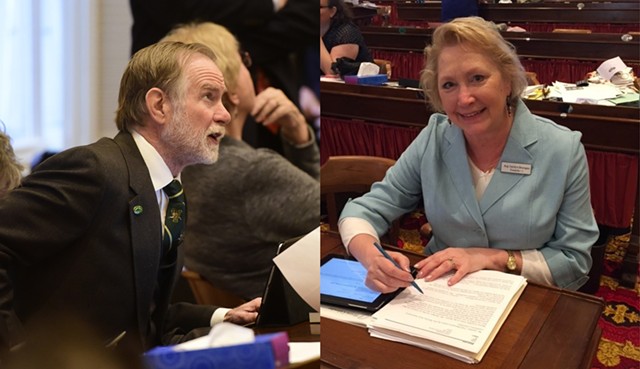 Sen. Carolyn Branagan (R-Franklin) and Rep. David Sharpe (D-Bristol) announced at their respective town meetings last week that they will not seek reelection to the Vermont legislature this fall.

Branagan's announcement was first reported Monday by the County Courier. Her current term is her first in the Senate; she had previously served 14 years in the House.

"I love my job," Branagan said Tuesday afternoon. "I love the work we do. But I've been there 16 years, and it's time. This is supposed to be a citizen legislature; I think 16 years is enough. There was nothing bad that happened. I've just felt for several weeks that this should be my last term."

There's plenty of interest in the seat in the district, she said. "There's a lot of frustration over the liberal bent in Montpelier," she said. "It doesn't match what's happening in Franklin County."

Now that Branagan is stepping aside, Rep. Corey Parent (R-St. Albans) is expected to vie for one of the two Franklin County seats. If elected, he would take office at age 28, and would be the youngest member of the Senate. He declined to comment on his plans Monday.

Sharpe, the Bristol Democrat, has served in the House since 2003 and is currently chair of the House Education Committee, a job he characterized as "difficult." In recent years, the panel has had numerous tough debates on policy, administration, consolidation and public school spending.

"It's time to pass the torch, instead of waiting until you're over the hill," he told Seven Days.

His immediate plans involve well-earned freedom from outside obligations. "My wife has been very supportive," the 71-year-old lawmaker said. "I have grandkids now. It’s time to enjoy life."

House Speaker Mitzi Johnson (D-South Hero) said in an email that Sharpe will be missed.

"I'm grateful for Rep. Sharpe's long and compassionate service to his communities and the state," she wrote. "As a teacher and legislator, he has been a tireless and passionate advocate for a strong public education system. He constantly looks out for what is best for Vermont's kids."