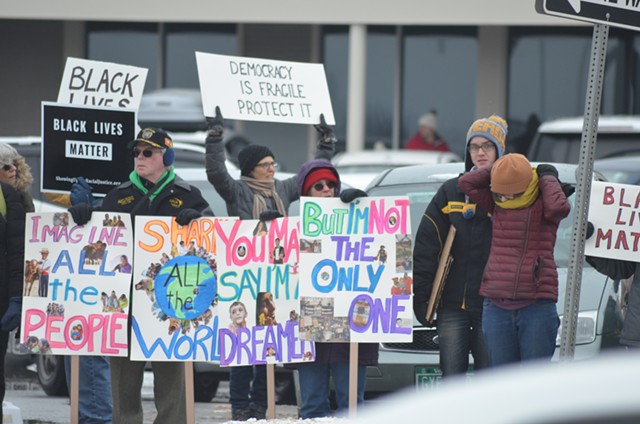 The white supremacist planners of a demonstration at the Staples Plaza in Burlington last month apparently moved the racist rally after news of it leaked in advance, according to recently released recordings of the group’s conversations.

Members of the Patriot Front group, about six or seven in all, ended up holding a short-lived rally in Burlington City Hall Park before they took the ferry to New York and held a similar demonstration in Plattsburgh.

Meanwhile, a group of anti-racism demonstrators who had learned of the planned rally gathered at the Staples Plaza to denounce the white supremacist, anti-immigration group.

Details of the Patriot Front’s planning process and its members' reactions to the demonstration were made public on Monday. Unicorn Riot, a nonprofit “alternative media” website based in Minneapolis, posted a searchable database of the group's audio recordings and online chats. The conversations were made over Discord, a chat platform used mainly by online gamers.

“The records of conversations between Patriot Front leaders and members span months and provide a unique insight into the operations of the self-described ‘American fascist’ organization,” Unicorn Riot wrote on its website. “Recorded conversations between members show an obsession with firearms, a nonstop tirade of racist, sexist and otherwise abusive language, and a desire to take action in the real world.”

Texas teenager Thomas Rousseau created the alt-right group in August, shortly after the Unite the Right rally in Charlottesville, Va., according to the Southern Poverty Law Center.

Among the “real world” actions Patriot Front members discussed on its Discord channel was the Burlington “flash demo.” But the group was unhappy when word of the February 10 rally got out ahead of time, leading to plans for the anti-fascist counter demonstration.

Patriot Front members react after their recent plan for a nazi "flash demo" in Burlington, Vermont was exposed.

"How the fuck did it get leaked?...is it a long story that involves, like, a leak within our organization?"


“How the fuck did it get leaked?” a Patriot Front member said on one of the recordings. “Is it a long story that involves, like, a leak within our organization, like somebody who’s …”

After a long pause, the first speaker replied, “Well, that’s not good.”

Despite the foiled plans, Rousseau, posting under the screen name Thomas Ryan, wrote on a forum that he purposely misled the counter protesters: “Hope you had fun at Staples, dummy.”

Another user posted a link to a Burlington Free Press story about the anti-racism demonstration.

“We coulda taken 'em,” user Charlemagne MD wrote. “It's all a bunch of stupid cunts.”

“There would be no purpose in that,” Rousseau replied. “They weren't even in our way. We weren't going to go there in the first place. They screeched in a random parking lot for an hour in the snow for no reason.”

“Lol,” Charlemagne replied. “Where did this rumor come from? Did you specifically troll them to get them to show up for nothing?”

“It was all part of the plan, fam,” Rousseau replied. 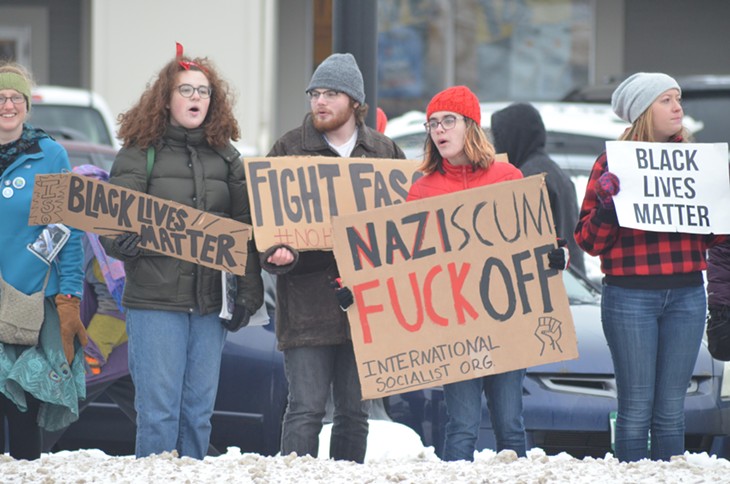 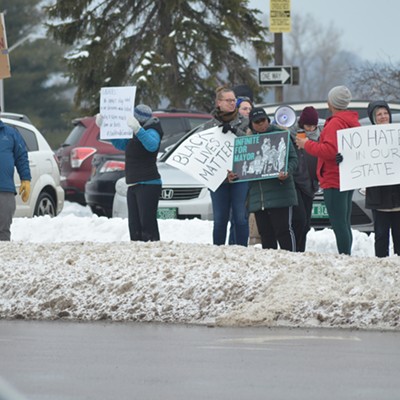 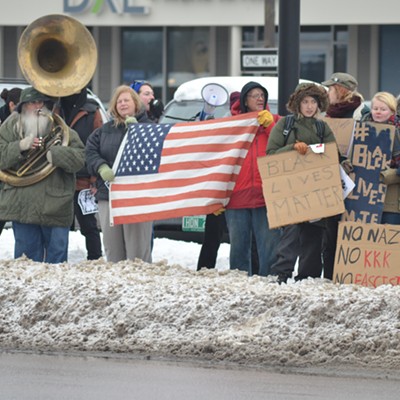 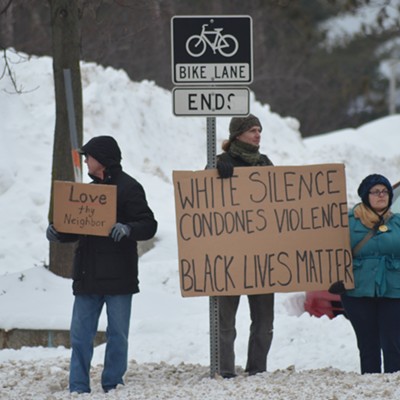 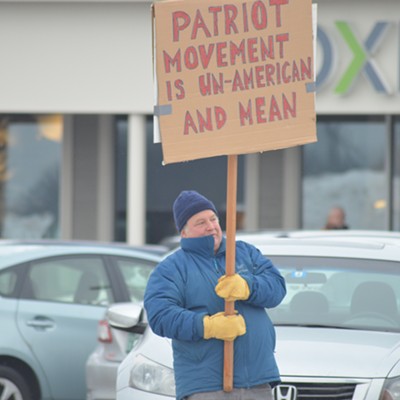 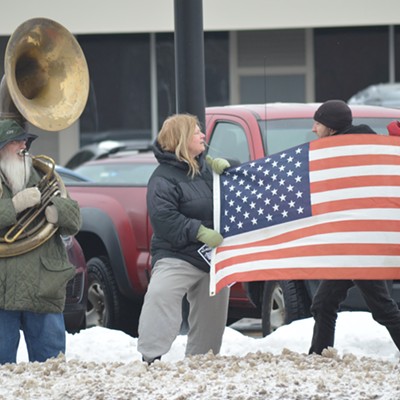 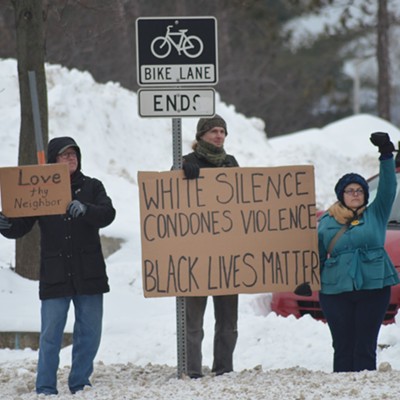 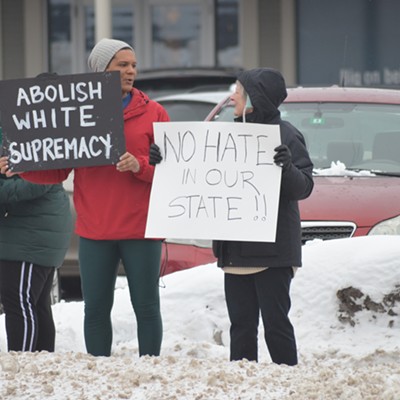 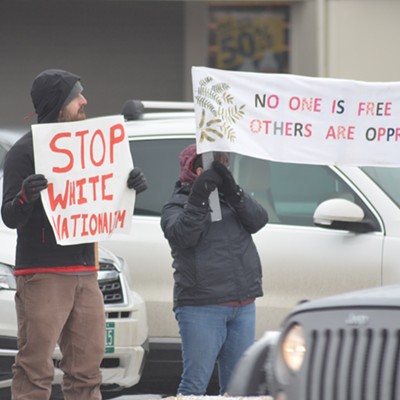 Photos From Anti-Racism Rally
By Sasha Goldstein
Click to View 31 slides
Several people did witness the rally in Burlington City Hall Park. Arshad Hasan said he was eating lunch at the Gryphon, across Main Street, when he saw the small, masked crew run up and unroll a banner that read, “Reclaim America!”

I ask a woman watching on [the] steps if I heard it right. She said it like a question, ‘Blood and Soil?’ It's nazis, I told her. She didn't know. The nazis are here, and they're marching on our town.


The Patriot Front members gloated about the reaction on their forum and mentioned holding a similar demonstration in Times Square sometime this summer.

One user, Jay MI, posted four photos of five men wearing sunglasses, along with bandanas that covered the bottom half of their faces. They appear to be on a ferry. Another picture shows the men, some holding American flags, standing in a snowy parking lot.

Burlington police chief Brandon del Pozo later told the Free Press that the demonstrators were likely from out of town because their van had a Pennsylvania license plate.

Two days after the Burlington demonstration, Rousseau appeared on a neo-Nazi podcast called “Salting the Earth.”

He told the hosts:

And their greatest minds came together with a plan of, we’re going to get 200 to 250 screeching cat ladies to bang pots and pans outside of a Staples parking lot and yell at cars for a couple hours in the snow, which they did.

While they were doing that, we just went somewhere else and we demonstrated in front of city halls in Burlington, Vt., and Plattsburgh, N.Y., which is just across from a lake or river — it’s nearby. We were completely uncontested by them.

A week after the anti-racism demonstration, four masked men walked along Williston Road to the Interstate 89 overpass at exit 14 — not far from the Staples parking lot. There, the group unfurled two anti-Muslim banners, according to South Burlington police.

“One of the signs stated, ‘Say no to Jihad,’ and had a caricature of a female figure with the letter ‘x’ for eyes,” Officer Jon Namdar wrote in an incident report. “The second one said, ‘End Islamic immigration,’ and showed the same caricature with swords beneath it.”

Cops received three calls about the banners around 4:30 p.m. on February 17.

One of them was from Becky Dayton. She and her husband were driving south after a trip to Montréal when she saw something suspended over Interstate 89 at Exit 14.

“I thought it was going to be a football team’s booster banner or a prom proposal,” she told Seven Days. Once she saw the crude caricature and the anti-immigration message, “My stomach just completely sank,” she said. “It was so upsetting.”

Dayton turned around in her seat and saw a second banner hanging from the northbound side of the overpass. She had her husband call the police.

“As it was impossible to identify the members … based on their chosen exercise of free speech and their refusal to speak with police, the banners were disposed of,” Namdar wrote in his report.

“It was definitely not like anything I’d ever witnessed in Vermont before,” Dayton said, “and very unsettling.”