City Councilor Lucas Herring was elected Barre's mayor on Tuesday and will replace Mayor Thom Lauzon, who is leaving office after his controversial 12-year tenure. 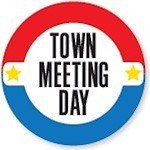 Herring campaigned as someone who would continue the development policies of Lauzon, who declined to seek reelection and is mulling a bid for lieutenant governor.

"It’s the consistent message in Barre that we are on the right track and we need to keep moving forward in that direction," Herring, 38, said in a phone interview. "It's time to come back together and get the work done."

Herring, an IT director for the Vermont Department of Corrections, served seven years on the council.

Departing Barre Mayor Lauzon Looms Large in Race for Successor
By Mark Davis
Politics
Among Herring's proposed initiatives was to redevelop Merchants Row, a downtown strip with some empty storefronts, and to connect segments of the city's bike path. He also supports a proposed $30 million downtown development, Park Center, which was proposed by Lauzon and other developers.
Prev
Next