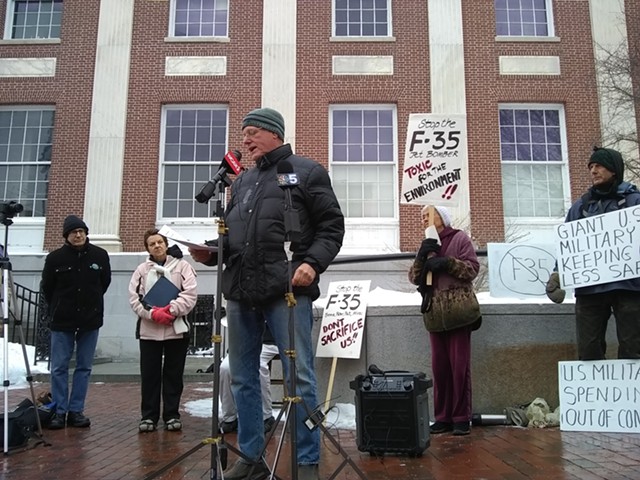 Activists for and against the basing of F-35 fighter jets at Burlington International Airport are gearing up — and opening their wallets — ahead of election day.

Members of Save Our Skies gathered 3,000 signatures on a petition to get a measure about the jets on the ballot and have since spent an estimated $15,000 advocating for a "yes" vote, according to lead organizer Jimmy Leas.

The question asks whether voters will "advise the City Council to: 1) request the cancellation of the planned basing of the F-35 at Burlington International Airport, and 2) request instead low-noise-level equipment with a proven high safety record appropriate for a densely populated area."

"This is such an important issue for health and safety," Leas said. "Let the people decide. It shouldn’t be decided for them."

Supporters of the ballot question handed out lawn signs, sent mailers, and have taken out nearly a dozen ads in Seven Days and the Burlington Free Press. They've set up at mayoral debates and the Burlington Farmers Market to hand out flyers. A GoFundMe page has raised $3,300 for the cause.

A group called the Coalition for a Livable Winooski has also taken out newspaper ads calling for Burlingtonians to vote yes on the ballot item because the added noise from the jets "means 75 percent of us will end up in an extreme noise zone so dangerous the government classifies it as 'unfit for residential use.'"

Meanwhile, proponents of the planes are fighting back, at times sparking fiery exchanges on Front Porch Forum.

Ernie Pomerleau, the head of Pomerleau Real Estate and son of the late Tony Pomerleau, has taken out his own fair share of newspaper ads and paid for postings on Front Porch Forum. He declined to say how much he'd spent. Neither side is required to report their spending to the state because the question is non-binding.

"I got tired listening to the misconceptions and misinformation, so I went to bat," said Pomerleau, who included in his ads seven different reasons residents should vote no on the measure. He reiterated the Air Force's claim that the F-35 is the Vermont Air National Guard's "only mission" and said the jets will bring jobs to the area.

"When the first F-35 lands in Burlington, I believe the loudest noise in the air will be the roar of applause from thousands of Vermonters cheering on this great accomplishment," Pomerleau wrote in a social media posting.

He called Save our Skies "deceptive" for contending that a ban on the planes would be a message of support for VTANG. "That's bullshit," he said.

Another group, Green Ribbons for the F-35, is also advocating for a vote against the ballot measure by posting regularly on social media. Members have scheduled a VTANG appreciation night this week, where they plan to sell F-35 hats.

Despite all the tension, the ballot item may have no effect whatsoever. It's advisory, and the mayor has no authority to reverse the decision. When the Air Force chose Burlington for F-35 basing in 2013, all three members of the Vermont congressional delegation supported the decision, as did the Vermont Air National Guard.

Members of Save our Skies have fought the F-35s since the Burlington City Council voted to allow the plan to move forward in 2013. The group eventually brought a lawsuit against the Air Force, which a judge dismissed in 2016.

But "military plans in other cities have been scrapped or greatly reduced in scope following intense pushback from community and political leaders," VTDigger.org reported on February 6. At least one city forced the military to reduce the operations and number of F-35s slated for its base, according to the Digger article.

The jets are scheduled to arrive in Burlington in 2019. Airport alterations are already underway to accommodate the new aircraft. Leas said he hoped that an affirmative vote might help pressure the Air Force to change course and relocate the planes.

Both incumbent Mayor Miro Weinberger and independent candidate Carina Driscoll said that they'd respond as they could if voters said "yes." Weinberger offered a cautious answer: "It’d be my responsibility to look very carefully about what the implications would be to communicate that we don’t want the planes based here."

Weinberger said he supports the basing of the F-35s; Driscoll acknowledged that the mayor's office has little power over the matter; a third candidate, Infinite Culcleasure, has previously said he opposes the planes.

But for those handing out flyers and sending out mailers, the effort isn't in vain.

Charles Simpson, a Progressive candidate for the Ward 6 city council seat and a leader of Save our Skies, sees the advocacy work as an example for other communities. "If we can get a positive vote, it’ll resonate across the country," Simpson said.