John Mejia, the University of Vermont staffer who vowed to refrain from eating until the university and the city of Burlington addressed a list of demands, ended their hunger strike Thursday after nearly a week of a water-only diet.

"I started this hunger strike because I wanted people who are supposedly our leaders to care. I wanted them to stop for a second, and they haven't," Mejia told a group of students at UVM's Davis Center late Friday morning.

"The unfortunate side effect is that I've negatively impacted my own community. There are plenty of people who are distraught at the thought of me dying ... who could not eat knowing that I was starving," said Mejia, who started the strike February 16.

The UVM staffer, who uses the pronouns "they" and "them," plans to "refuel" and "recharge" and continue to work with student leaders in pushing for their demands to be met. Mejia had asked for a Black Lives Matter flag to be permanently flown on campus and for increased funding for anti-racism events.

The student gathering in the Livak Fireplace Lounge and Gallery on the fourth floor of the Davis Center was the second protest in as many days. About 100 anti-racism protesters blocked a section of Main Street on Thursday and caused evening rush-hour havoc. Students also swarmed the Waterman Building on Tuesday in a similar display. 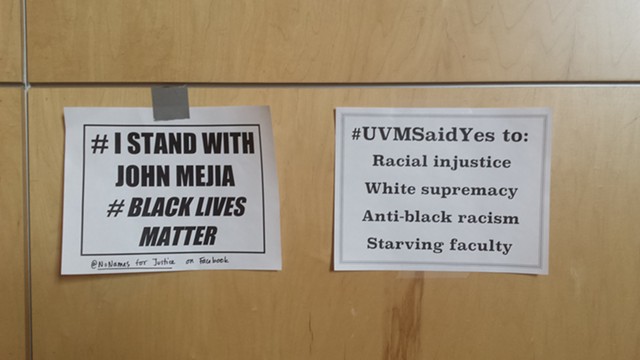 The latest assembly Friday coincided with an event for admitted students. Various campus departments had set up information tables at the Davis Center to offer assistance to prospective students and their parents, some of whom stood on the fringes and listened to the speeches made by the student leaders and Mejia.

Just before noon, the students made their way down to the building's Olin Atrium on the first floor, where they chanted slogans that called for UVM president Tom Sullivan's resignation.

Sophomore Olivia Bowman, who was manning the Student Life, Division of Student Affairs table, said a couple of parents had asked her about the commotion. Others didn't take much notice of the assembly.

"Some people would put their head down and ignore what's going on, which is what I've seen a lot of students do, too," Bowman said.

Later Friday, Burlington Police Chief Brandon del Pozo released a statement about the police response to Thursday night's "civil disobedience" on Main Street. He said there were no arrests made and defended his department's decision to allow the protest to proceed.

"When the reason people are blocking traffic is to engage in political protest on matters of great interest to the community, officers are required to be judicious in the use of their powers to remove protesters from the road," the statement read.

"The police department rejects the idea that it has an automatic obligation to put an end to any protest that employs civil disobedience. Similar traffic delays have been caused by fatal accidents, hazardous spills, the Independence Day fireworks display, the Champlain Valley Expo, and snow."

But del Pozo also said that "the action was unlawful" and that "widespread disruptions cannot become the norm."