A group of young Vermonters and gun control activists gathered at the Vermont Statehouse Tuesday morning to call on lawmakers to pass several proposed gun-control bills.

The demonstration came in reaction to a school shooting in Florida last week and an incident in Fair Haven in which authorities stopped a would-be school shooter before any violence took place.

“Fix this before my kid is texting me from under a desk,” read a sign held by a demonstrator standing in a light rain on the Statehouse steps.

The demonstration was organized by GunSense Vermont, but the presence of students from the Vermont Commons School brought the message home. The students called on lawmakers to pass new gun laws before more shootings take place.

In a slow, quiet procession, the students wove through the halls of the Statehouse bearing signs that read “protect kids not guns” and “right to own a gun or surviving school.”

Demonstrators said they were hoping to make gun control an unavoidable topic in the Statehouse. Three gun control bills are currently in the Senate Judiciary Committee. One would mandate background checks for all gun sales. Another would allow police to confiscate weapons when they make an arrest for domestic violence. A third bill would create a court process allowing police to confiscate guns from those ruled to be an “extreme risk.”

The universal background check bill has been stuck in the committee since last year and hasn’t moved because three of the panel's five members oppose it. (A 2015 attempt to mandate background checks was also thwarted by a 3-2 vote in the same committee.) The current bill's lead sponsor, Sen. Phil Baruth (D/P-Chittenden), said last week that the Senate should be ashamed for doing “jack shit” about gun violence.

Burlington Mayor Miro Weinberger attended the Tuesday morning rally in Montpelier and said student involvement at the event gave him hope that the years-long political deadlock around gun control would come to an end.

“It is very hopeful to be standing with so many of you this morning,” Weinberger said to a crowd in front of the Statehouse, “and particularly to be standing with our kids and children who have been so eloquent on this issue. That, I hope, is what will finally change this terrible dynamic and lead to action.”

Weinberger joined other advocates in calling for statewide, mandatory universal background checks, as he has since the Sandy Hook Elementary School shooting in December 2012.

“The rest of the world simply does not tolerate this kind of massacre of its children,” Weinberger said. “The United States and the state of Vermont should not either.”

But if lawmakers don’t pass any statewide measures, Weinberger said it’s unacceptable to block local gun control. Burlington voters in 2014 approved a measure banning guns in bars, requiring residents to lock them up when not in use and allowing cops to confiscate them from those accused of domestic violence. The legislature has so far refused to approve the necessary changes to the city’s charter, blocking enactment of the proposed policies. 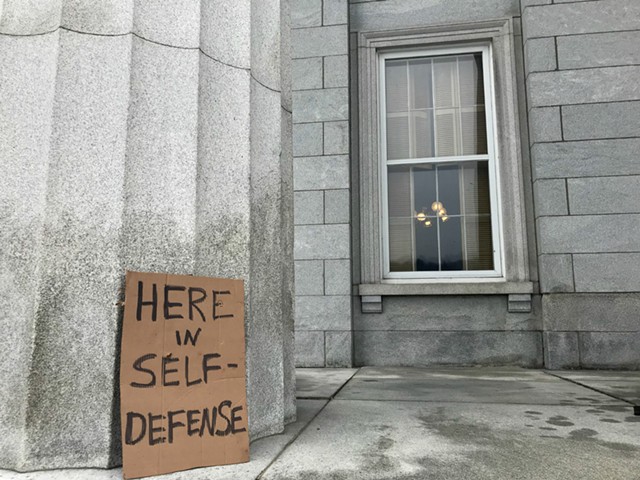 “If Montpelier can’t or won’t get the job done, at the very least this Statehouse should allow cities and towns that want to move forward on their own to protect our children, our domestic violence victims and our police officers," the mayor said. "We should be allowed to take responsibility and do that as our own communities.”

"I have begun conversations about whether we could bring [the charter changes] back this year,” he said in an interview with Seven Days Monday. “I do plan to spend some time on this.”