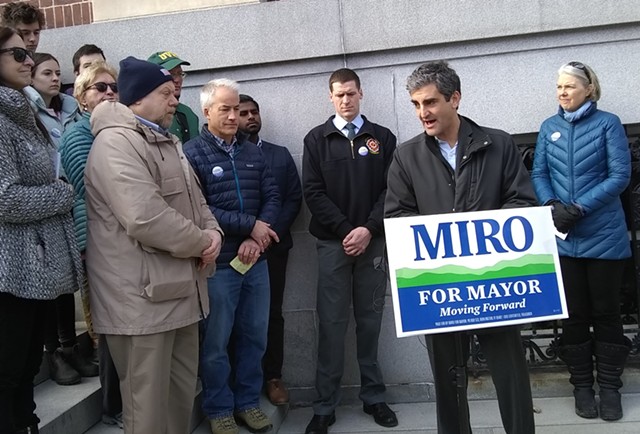 The battle of the endorsements is on in the Burlington mayoral campaign.

Mayor Miro Weinberger on Monday trotted out a dozen supporters to sing his praises, including Burlington city councilors, legislators and union employees. The incumbent Democratic candidate also rehashed the list of endorsements he's tallied during his reelection campaign and announced another key backer: Republican Kurt Wright, a longtime city councilor, state representative and one of Weinberger's opponents in the 2012 mayoral race.

The laudatory press conference Monday appeared to be a direct response to independent candidate Carina Driscoll's announcement last week that the local chapter of the American Federation of State, County, and Municipal Employees had voted to back her campaign. The union represents more than 200 city employees, some of whom later pushed back against Driscoll's assertion that the endorsement was unanimous.

"I was extremely concerned when I read Carina's announcement characterizing her union support as 'the unanimous endorsement of the city's workers,' a statement that, as you can see here, is patently untrue," said City Councilor Joan Shannon (D-South District), a Weinberger supporter. "If there's one position in this city that's more important than the mayor, it's the one of city workers, collectively."

Weinberger noted pointedly that he had received the support of three of the four unions that negotiate contracts with the city of Burlington: the Burlington Police Officers Association, the Burlington Fire Fighters Association, and the International Brotherhood of Electrical Workers Local 300. Weinberger had announced those endorsements in press releases earlier in the campaign.

"We are just over two weeks from Town Meeting Day and the broad coalition supporting our campaign is coming into focus," Weinberger said.

At Monday's event, City Councilor Dave Hartnett (D-North District) read a statement from Wright, who was too sick to attend in person. The Ward 4 councilor, who had previously said he was undecided, noted in the statement that he backed Weinberger despite "many differences" between the two on certain issues, including the North Avenue bike lane. "I am endorsing the mayor on the basis of issues such as fiscal responsibility, growing our economy, renovating the bike path, permit reform, and his unwavering support of the Vermont National Guard and the basing of the F-35s," Wright's statement read.

"Rather than seeking any sort of endorsement, our campaign is more interested in hearing from people who live or work in the Queen City about what matters to them," Culcleasure wrote on his campaign Facebook page as he advertised a dinner and community conversation event. "We hope to connect to each other the various struggles we are engaged in our workplaces and communities."