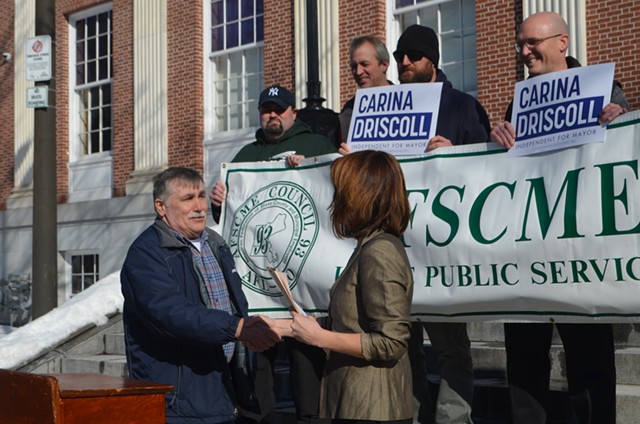 Members of a Burlington city employees union are pushing back after their president declared a "unanimous endorsement" of Burlington mayoral candidate Carina Driscoll Wednesday.

Several members of the local chapter of the American Federation of State, County, and Municipal Employees told Seven Days that they do not support Driscoll — and never knew about the endorsement vote.

"There was never an email, never a discussion, none of the union members voted," said Ted Miles, a Burlington code enforcement inspector who is a member of the AFSCME union. Miles, who said he'd cast his Town Meeting Day ballot for incumbent Mayor Miro Weinberger, also questioned the critiques that other union members had for the current administration.
"It was definitely not any kind of unanimous endorsement by any stretch of the imagination," Miles said.

Union president Karl LaBounty stood by his claim that the endorsement was unanimous. He said about 20 people — from the AFSCME local 1343, council 93 executive board, department representatives and "a couple" of members — voted in favor of Driscoll, LaBounty told Seven Days Friday. About six of those 20, including LaBounty, actually live in Burlington, he estimated. The union represents approximately 400 Chittenden County municipal workers.

"Everyone present" voted in favor of Driscoll, LaBounty said.

But "none of us were aware of any notice [of the vote] that went out," said Matthew Perry, a city code enforcement inspector union member. Perry said he would have preferred that the union didn't take a political stance.

Driscoll, who will face Weinberger and independent Infinite Culcleasure in the March 6 election, also described the endorsement as "unanimous." She later told Seven Days that she relied on LaBounty's assessment.

In the two days since that announcement, Driscoll has touted the endorsement on social media and in a press release. "This endorsement is a vote from within city government for change," she said in her opening statement Thursday evening at a mayoral forum moderated by VTDigger.org.

Weinberger has received endorsements from the Burlington Fire Fighters Association, the Burlington Police Officers Association, and the Vermont Building and Construction Trades Council, which includes local chapters of the International Brotherhood of Electrical Workers Local 300, and the Plumbers and Pipefitters UA 693. It's the first time that the AFSCME union has offered an endorsement in recent memory, said Nate Lavery, the union vice president, and it could have been handled better.

"We went through the process, but it doesn’t necessarily reflect the views of all its members," said Lavery, who works as an inventory control specialist for the Department of Public Works. "It was amateur of us, how it went down."

LaBounty said that no email went out about the meeting, but said that agendas, and later minutes, were posted at each work site.

There is no typical process by which all unions endorse political candidates. Sean Ploof, president of the Burlington fire fighters' union, said that his group allowed all members to vote through an online survey.