Petra Cliffs to Expand in Burlington's South End | Off Message 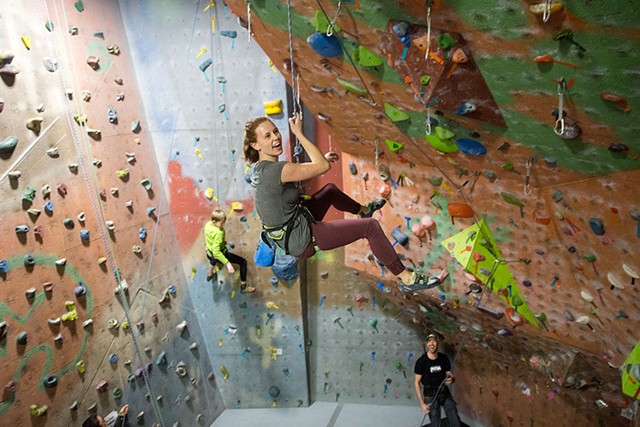 Petra Cliffs Climbing Center and Mountaineering School has bought a parcel of land from City Market/Onion River Co-op and announced plans to move to a new, larger facility in Burlington's South End.

The rock-climbing center finalized a deal Monday to buy 1.7 acres from City Market, said co-owner Andrea Charest. Petra Cliffs will construct a new gym about double the size of its current 6,000-square-foot facility, said Charest. The new gym will have higher climbing walls as well as a childcare facility and space for fitness programs.

Charest would not disclose the purchase price.

Petra Cliffs won't be moving far. The new facility will be constructed at 75 Briggs Street — just a few doors down from its current location. It will be alongside the new City Market, which opened its store on the corner of Briggs Street and Flynn Avenue in November.

Charest said she and her husband, co-owner Steve, have been planning to expand the business since they bought it in 2012. Petra Cliffs was a "state-of-the-art" facility when it opened 18 years ago, she said — but no longer. Meanwhile, demand is high.

"Climbing is definitely growing in popularity," she said, adding that rock climbing is scheduled to become an Olympic sport in 2020. About 100 people a day climb at Petra Cliffs, she said.

So the Charests replied to the co-op's request for proposals last May, and City Market selected the business from several applicants, said co-op general manager John Tashiro in a press release Tuesday.

The two businesses will consider shared programming such as cooking and climbing summer camps for kids, Charest said.