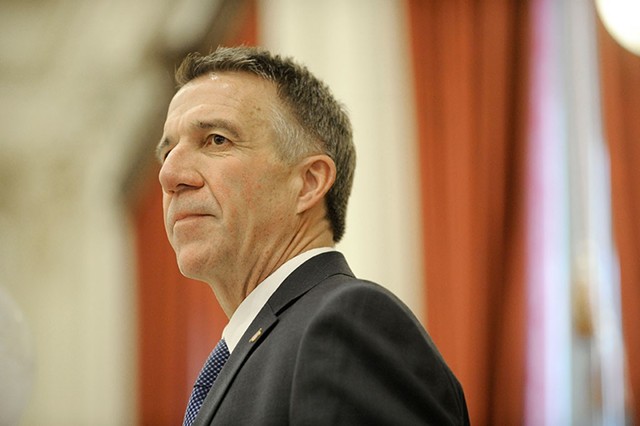 Gov. Phil Scott’s proposed budget would eliminate a $1.39 million program that helps disabled Vermonters hire home attendants to help with daily needs such as bathing, getting dressed or preparing food.

The cut prompted concerns from Rep. David Yacovone (D-Morristown), who said it seems to contradict Scott’s governing platform of protecting Vermont’s most vulnerable.

“This is what’s most upsetting to me: It’s the fairness of, other people throughout this budget are going to get subsidies who have far more wealth, and yet these people are not,” Yacovone said of the disabled Vermonters using the Attendant Services Program.

"The governor said one of his top three themes consistently has been to help the vulnerable," said Yacovone, a former commissioner of the Department for Children and Families. "I think these people are as vulnerable as it gets."

Administration officials did not mention the program's elimination Tuesday in a press briefing about the spending plan, and Scott, in his budget address that day, said nothing about the cut.

Calling for Fiscal Restraint, Scott Proposes Modest Vermont Budget
By Alicia Freese
Off Message
Yacovone said the House Appropriations Committee learned of the change Tuesday afternoon while questioning administration officials. The program allows 43 Vermonters to hire help — even members of their household — if they need assistance with two or more “activities of daily living.”

Monica Hutt, the commissioner of the Department of Disabilities, Aging and Independent Living, told Seven Days Wednesday that the state is not abandoning the disabled Vermonters who use the program, and will help find other resources to assist them.

Hutt said the cut affects disabled Vermonters who do not qualify for Medicaid. Another 90 people who get federal benefits will not be affected.

“We are not looking to hurt people here, so I think we can identify and work to do some gradual transitioning” to other social services programs, Hutt said.

Hutt said officials chose to eliminate the program because, unlike its Medicaid-supported counterpart, the state’s $1.39 million investment isn’t unlocking any federal matching funds to help pay for it.

Hutt said the Attendant Services Program has been “frozen for several years,” meaning no new applicants have been added. In that time, the population using the program has fallen.

“We are seeing gradual attrition of that program anyway, and what our hope is and our intention is, is to really look at — because it’s 43 people, we have the capacity to look at those 43 people individually,” Hutt said.

The administration’s new approach to the Attendant Services Program is to “figure out who each person is and what’s going on for them,” Hutt said.

Hutt said a review process is just beginning. The affected Vermonters have not been notified about the potential cut, which could go into effect as soon as the new fiscal year begins in July.

“I can give you absolutely no guarantees how this is going to end,” Hutt said. “I don’t think that it’s anybody’s intent to just hurt people without any consideration.”

Yacovone said the administration could better protect vulnerable Vermonters by simply adding a wealth-based screening process — just like in the Medicaid version of the program — that ensures only people who need financial assistance are receiving the taxpayer money.

Yacovone said that instead of cutting the program, the state should add limits to cover people who don’t qualify for Medicaid and can’t afford to hire help on their own.