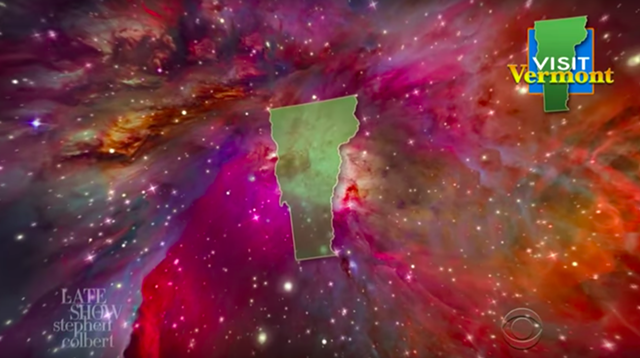 Vermont Gov. Phil Scott pledged millions of dollars Tuesday to help attract new state residents, but it looks like "The Late Show with Stephen Colbert" beat him to the punch.

The comedy show on Tuesday spoofed the state's recent decision to legalize marijuana with a satirical Vermont tourism ad. The two-minute clip touts legal weed, and encourages visitors to explore the outdoors in the Green Mountain State — "or just stay inside on the couch, laughing with your friends!"

"Ski Stowe Mountain," the narrator intones, "or spend hours staring at your hands, thinking about things!"

This ad, though, is not state-sanctioned. Are any of those stock images or shots actually from Vermont? Not the mountain scene at "Stowe." And it's full of tired clichés about weed smokers, including a Grateful Dead reference and a description of getting high and thinking about the size of the universe (and food). But hey, it's worth a watch.