With 'Mixed Emotions,' Scott Legalizes Marijuana in Vermont | Off Message 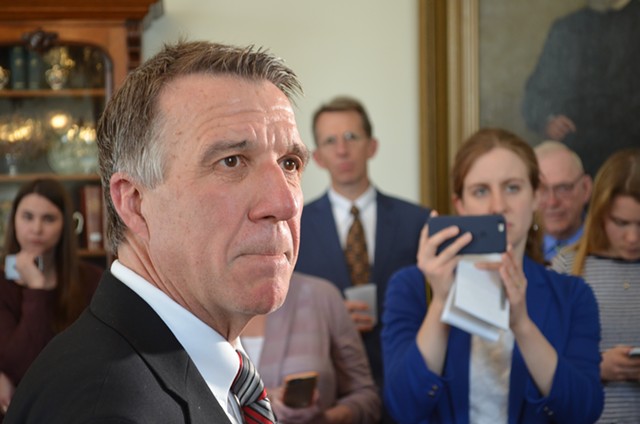 Gov. Phil Scott signed a bill Monday that legalizes adult possession and consumption of marijuana in Vermont beginning on July 1.

His signature makes Vermont the first state to legalize pot by legislative action; other states used public votes on the issue.

The signing was not a surprise. Scott said last week that he planned to sign the bill privately before his Monday night deadline. The bill could also have become law if he hadn't signed or vetoed the legislation before the deadline.

Scott said in a statement Monday that he signed "with mixed emotions."

Vermonters will be legally allowed to possess up to an ounce of marijuana, as well as two mature and four immature pot plants. Scott noted that "consumption of marijuana in public places is prohibited."

"Consumption of marijuana by operators and passengers in a motor vehicle is prohibited," the governor said in his statement. "And schools, employers, municipalities and landlords are also empowered to adopt policies and ordinances further restricting the cultivation and use."

The new law also does not allow retail sales of weed, and it leaves in place criminal penalties for people in possession of more than one ounce of the drug. The result is what policy experts call a "gray market" which allows people over 21 to have and use marijuana, but doesn't give anyone a legal means to purchase it.

Some proponents of marijuana legalization have criticized the law for not going far enough. They say the state is forgoing substantial tax revenue by making it legal to own marijuana, but not setting up a legal retail system.

Scott last May vetoed a similar legalization bill and then appointed a commission to study the issue, including the possibility of a legal retail system. The commission's latest report was released January 16, but did not make any specific recommendations about regulated retail; commissioners said that topic will be addressed more fully in another report due in December.

In his statement Monday, Scott said he is looking forward to that report, but warned legislators that he isn't going to approve a retail marijuana system in Vermont unless it satisfies his concerns about youth drug use and road safety.

"To be very direct: There must be comprehensive and convincing plans completed in these areas before I will begin to consider the wisdom of implementing a commercial 'tax and regulate' system for an adult marijuana market," Scott said.