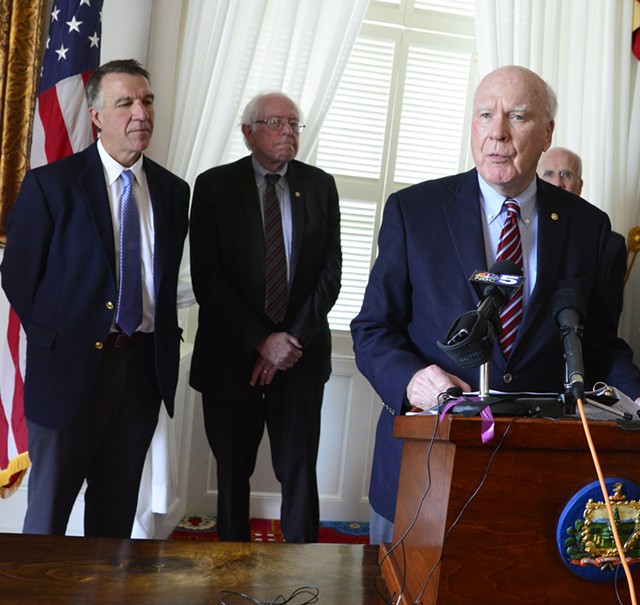 Vermont’s two U.S. senators, Patrick Leahy (D-Vt.) and Bernie Sanders (I-Vt.), on Monday voted against a bipartisan, short-term deal to end a three-day government shutdown. Congressman Peter Welch (D-Vt.) has said that he plans to do the same when the legislation comes before the House.

Leahy and Sanders were among just 18 senators, including two Republicans, who opposed a procedural measure clearing the way for a spending bill that would fund the government through February 8. Another 81 senators, including 33 Democrats, voted to proceed with debate.

Senate Majority Leader Mitch McConnell (R-Ky.) won over a majority of Democrats by promising to hold a vote in February on the fate of so-called Dreamers, undocumented immigrants brought to the U.S. as children. Their fate has been uncertain since President Donald Trump rescinded the Obama-era Deferred Action for Childhood Arrivals program last September.

Democrats had previously refused to support a short-term spending bill unless it included explicit protections for Dreamers. To the consternation of their more liberal colleagues — and those considering running for president — a group of moderate and politically vulnerable Democrats worked over the weekend to forge a compromise that would reopen the government in exchange for the promise of a vote on DACA.

In a statement Monday afternoon, Sanders said, "The reason I voted against today’s continuing resolution is simple: Tens of millions of lives are at stake. We must act NOW, not kick the can down the road."

His concerns, Sanders said, include "the fate of the 800,000 Dreamers who have lived here almost all of their lives, but could soon be faced with deportation" and the "27 million Americans who will find it harder and harder to get their health care through community health centers because that program has not yet been reauthorized."

Leahy, who serves as vice chair of the Senate Appropriations Committee, said in his own statement Monday that he was "relieved there is an end in sight to this shutdown."

"But," he added, "Republican leaders and President Trump have left too much undone — from a bipartisan budget deal, to disaster relief, to community health centers, to the opioid crisis, to DACA."

After final passage in the Senate, the measure is expected to move to the House later Monday. When it does, Welch plans to vote against it.

"Today marks the fourth time in four months that Congress will pass a budget patch rather than a long-term budget that reflects the pressing priorities of the American people," the congressman said in a written statement.

He expressed doubt that Democrats will get what they were promised.

"Regarding the Dreamers, Senator McConnell has offered weak assurances that the Senate will soon address their status," Welch said. "Speaker [Paul] Ryan has given no such assurance to the House, not even a weak one."