Burlington to Cut Back Some Hours of Parking Enforcement | Off Message

Burlington to Cut Back Some Hours of Parking Enforcement

Burlington officials have lopped off some hours of parking enforcement at city meters.

In the nine-square-block area known as the city's downtown core, drivers will pay to park between 9 a.m. and 9 p.m. Previously, enforcement there began at 8 a.m. and extended until 10 p.m.

Parking costs $1.50 an hour in the core Monday through Saturday, and is free on Sundays.

Outside of the core, which is bounded by Cherry, Pine and Main streets and South Winooski Avenue, drivers will pay from 9 a.m. to 6 p.m. The changes get rid of enforcement from 8 to 9 a.m.

Additionally, all 15-minute meters will shift to 30 minutes in an effort to "increase value and encourage more use," according to the city. 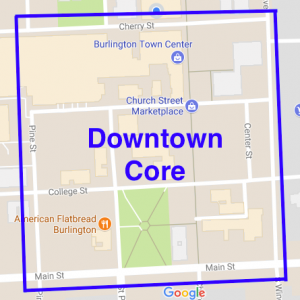 Chapin Spencer, director of the Department of Public Works, recommended the changes to the Public Works Commission in November. He said the decreased enforcement hours will increase use downtown and help the city reach a goal of 85 percent occupancy — about one or two free spaces on each block.

Burlington enacted a pilot program on December 1 as a way to test the changes ahead of holiday season traffic, Spencer said Thursday.

Burlington has long struggled with parking shortages and dissatisfied drivers. The new schedule came, in part, as a result of the Downtown Parking Improvement Initiative, a 2013 effort by the Burlington Business Association and City Hall. The city had studied parking availability over a two-year period, according to a memo Spencer sent to the city council.