Beach Club Planned for Blodgett Property in Burlington | Off Message 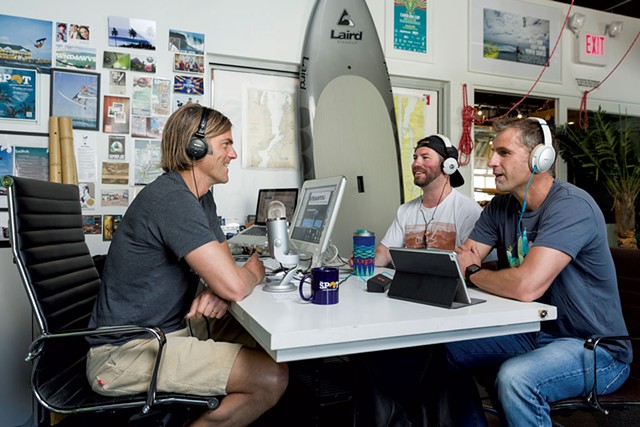 The grassy lawn in front of the Blodgett Oven property on Lake Champlain will host the new Burlington Surf Club starting on May 1, the property's owner said.

The lakefront expanse in Burlington's South End will feature changing rooms and storage space for paddleboards, wind surfers and small boats. Yoga and other movement classes will be offered at an open-air pavilion-style building.

That's according to Russ Scully, who, with his wife, Roxanne, purchased the industrial Blodgett property last year for $14.3 million. He also said plans are percolating for potential new office and commercial uses in the manufacturing buildings on the 16-acre Blodgett property.

The Surf Club will offer paddleboard and windsurfing lessons, as well as Hobie Cat sailing. The new business will allow the Scullys to centralize rentals and lessons they have been offering elsewhere through their store WND&WVS.

Day rates will be available as well as summer-long memberships for individuals, couples and families. Russ Scully told Seven Days the rates have not been finalized.

The club will help expose more people to Lake Champlain, and hopefully make them appreciate what an important resource it is, Scully said.

The surf club will be open from May through October. Construction began in late fall, he said. Several of the structures are already up.

Blodgett is moving to a new site in Essex but has a lease to keep workers at the Burlington location through the end of 2018.

After the Scullys bought the Blodgett property, some people speculated they would seek a zoning change to capitalize on the lake views with a hotel and condos.

On Monday, Scully said that that's not the plan. He's seeking commercial tenants and working with city and state economic development officials to recruit a large business, possibly in the tech sector.

“It's not zoned for hotels or residential right now and I don’t see that changing," Scully said.

He added: “I think, honestly, one of my goals for those buildings is to use them, to create an opportunity to attract another big business that we couldn’t get to Vermont without a site like this.”

The lake views and the availability of at least 150,000 square feet of space, with the potential to build more, present a unique opportunity, Scully said.

"I'm a big fan of the guys at Dealer.com and everything they've done,” Scully said.

But one of Dealer's challenges is that employees don't have enough options locally if they want to move on, Scully said. “If it doesn’t work out, there's really not a lot of lateral movement in Burlington. So if we were to get another player in here, it would create options for all the Dealer staff. It would help them with their recruiting.”

And two major tech employers could lead to a third, Scully said.

Scully will meet with neighbors who are interested in learning more about his plans for the Blodgett property at 5:30 p.m. Thursday at the St. John's Club on Central Avenue.

Correction, January 16, 2017: The Scullys do not operate a rental operation at Oakledge Park. A previous version of this story contained an error.