One Controversial Coyote Hunt Is Canceled, and Another Crops Up | Off Message

One Controversial Coyote Hunt Is Canceled, and Another Crops Up 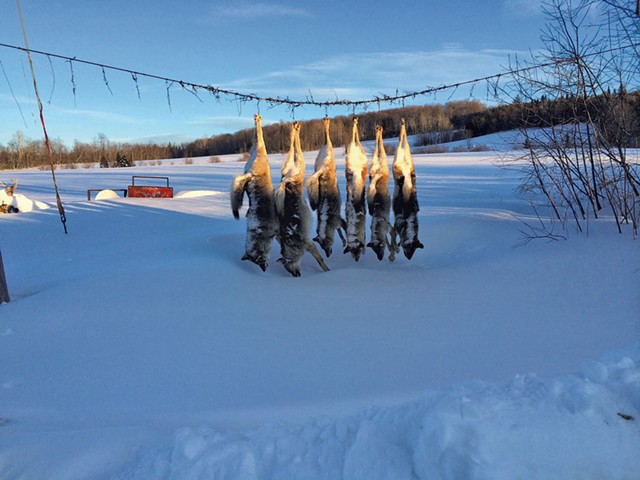 Sponsors of a monthlong coyote hunting contest planned for February canceled the event. Series11 sporting goods store and the Weston Rod & Gun Club in southern Vermont cited a lack of interest in a posting on social media.

Meanwhile a different coyote hunting contest, for the weekend of February 10 and 11, is being sponsored by the Green Mountain Houndsmen Club in Franklin County, according to Protect Our Wildlife, a Stowe-based nonprofit.

The Stowe organization is one of several animal rights groups pressing Vermont lawmakers and state Fish & Wildlife Commissioner Louis Porter to ban coyote hunts on the grounds that they promote senseless killing of animals that no one wants to eat.

Green Mountain Animal Defenders circulated a petition to ban coyote hunting in Vermont and called the Series11 planned hunt a "killing spree." The petition, on change.org, had attracted almost 8,000 signatures as of Thursday afternoon, although many of those were from people who live outside Vermont.

Opponents of coyote hunting contests have also asked Vermont landowners to post their property to prohibit all hunting as a way to pressure the state to take action against the coyote contests.

Series11 sells guns and other goods in Londonderry. A message posted on the store's Facebook page Wednesday said the hunt was canceled due to lack of participants. The decision had nothing to do with pressure from activists, according to the posts on the page.

A man who answered the phone at Series11 Thursday said only four people signed up. He declined to give his name and reemphasized that protests against the hunt played no role in the cancellation.

Supporters of the hunts say they reduce coyote attacks on Vermont's deer herd and help keep the thriving coyote population from spilling into residential areas where the animals sometimes prey on cats and dogs or scare people.

Vermont has an open season on coyotes, meaning they can be hunted anytime.

Critics say that's cruel and that coyotes are often killed in a particularly brutal fashion, including being clubbed. "I don’t think there is any animal that is treated more terribly than coyotes," said Brenna Galdenzi, president of Protect Our Wildlife. "There is a deep hatred for these animals by hunters and they are just treated without mercy.”