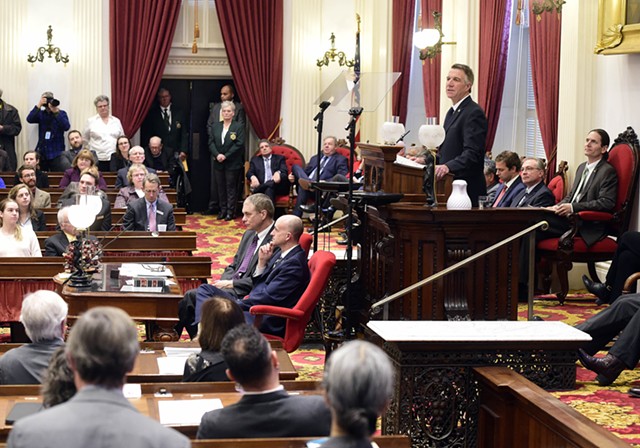 Those who were waiting to hear specific plans from Republican Gov. Phil Scott will have to wait at least a little longer. Thursday's State of the State address in Montpelier was full of stirring calls to action, but lacking in concrete plans and proposals.

Maybe that's unfair. After all, these speeches are usually heavy on the bromides. But Scott is entering his second year in the corner office, and he still seems to be figuring out exactly what to do. Even his assessment of the state of the state was self-contradictory.

Early on, he said that "the state of our state is very strong." (The "very" was an ad lib, not included in the text of the speech.) That statement came a few paragraphs after Scott had proclaimed this "a difficult moment for our state and our country." And the rest of the speech was full of calls to take (ill-defined) action on a series of dire challenges that threaten the future of the state.

Scott outlined an agenda that was basically unchanged from his first year in office: making Vermont affordable, getting a handle on public school costs, growing Vermont's workforce and economy, addressing water quality and climate change, and tackling the opioid crisis. But his No. 1 priority — which severely restricts his ability to take positive action on all of those issues — is holding the line on taxes and fees.

He pronounced himself "ready to prevent taxes and fees from increasing again this year. And just so I'm clear, that includes statewide property tax rates."

Education Secretary Rebecca Holcombe has estimated that an 8 percent hike in property taxes will be needed this year, so that's a bold statement on the governor's part.

In some cases, Scott promised more specifics in his budget address, which is three weeks away. But on several issues, he called for "working together" with the legislature, which is either a noble call for bipartisanship or an admission that he doesn't have the answers — or wants to share the blame for unpopular solutions.

On school spending, he noted that Vermont spends $1.6 billion a year to educate fewer than 80,000 students. Scott speaks frequently of the state's low staff-to-student ratio. But is he proposing specific ideas for cutting the cost of public schools? Nope; he wants to "work together" with the legislature.

After all, what politician in his right mind would go out on a limb with a call to lay off teachers or centralize control of school budgets?

Scott aspires to be a transformational governor, ushering in a new era of prosperity for all Vermonters — rich and poor, urban and rural, those with college degrees and those without. But he can't take the steps he believes are necessary until we start to see the economic growth. In short, we have a chicken/egg problem.

"There's nothing wrong with wanting government to invest in programs that enhance the lives of Vermonters," he said. "But the fact is, until we're able to increase the size of our workforce and grow the economy, we will not have the revenue to meet current or future needs."

Which means he has to find ways to spur a Great Leap Forward on the cheap. He promises a vigorous, creative marketing campaign to entice employers and workers to relocate to Vermont. But generally speaking, marketing campaigns just don't move the needle. Vermont's population has been roughly stagnant for several decades; it's hard to imagine that fact being changed by a marketing effort, no matter how well devised or targeted.

As far as I can tell, there were only two specific proposals in the entire speech. One would provide members of the Vermont National Guard and Air National Guard with free college tuition. The other would exempt military pensions from the state income tax. Those are worthy, but incremental, ideas compared to the scope of Vermont's aging demographics and shrinking workforce.

Some issues, like the environment and health care, received passing mentions with no specifics at all.

Scott will get another chance to launch specific policy initiatives in his budget address. For now, we're left with calls for robust action but very little sense of exactly what kind of action he wants Vermont to take.

Except, of course, please don't spend any money.