In State of the State, Scott Calls for 'Bold' Campaign to Attract More Workers | Off Message

In State of the State, Scott Calls for 'Bold' Campaign to Attract More Workers 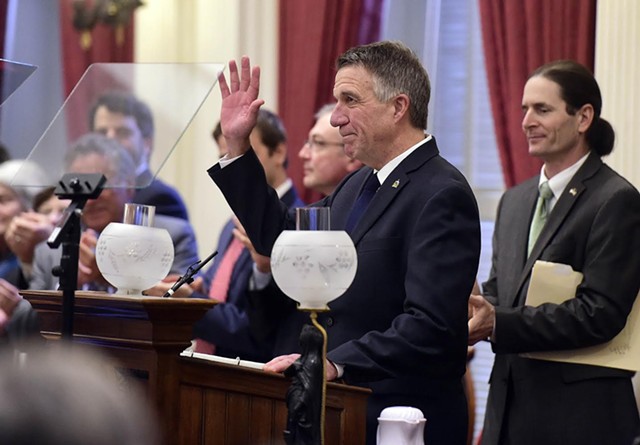 Gov. Phil Scott opened his first State of the State address Thursday by touting what he doesn’t plan to do: raise taxes or fees.

Providing a bleak assessment of Vermont’s economy, Scott proposed one major remedy: Bring more workers to the state. The first-term Republican pledged to undertake a "bold, sophisticated campaign to identify and persuade working-age individuals, families and entrepreneurs to relocate [to] Vermont."

The specific recruitment ideas he offered were modest and mostly targeted at military service-members and veterans. They included paying full college tuition for members of the Vermont National Guard and eliminating state income taxes on military pensions.

He also pledged to entice working-age residents to stay in Vermont, in part by expanding the state’s adult technical education program.

Scott argued that, in his first year in office, he had helped the state "stop digging" itself into a deeper financial hole, but he suggested that there was more work to be done.

Emphasizing the state’s shrinking student population, Scott called on lawmakers to work with him "to transform our K-12 system, based on the needs of our kids and not nostalgia." He said he would not accept higher statewide property taxes, though he did not explain how he would achieve that goal.

The governor’s speech came during a break in a daylong debate on the House floor over whether to legalize marijuana. Scott took a jab at the legislature’s ongoing effort to pass a legalization bill similar to one he vetoed last year.

“We must consider the effects our actions have in every county, city and town,” he said. “Imagine how it must seem to a family who’s struggling to get by, who can't afford to pay their property tax bill, to turn on the news and hear that the marijuana debate was ranked Vermont’s number one news story of 2017.”

Immediately after the governor’s speech concluded, the House resumed debating the bill, which Scott now plans to sign if it reaches his desk in its current form.

Toward the end of his 36-minute address, the governor acknowledged the need to clean up the state’s waterways and mitigate the effects of climate change, though he made no concrete commitment to fund the former. The only specific proposal he offered to address the latter was “to make electric vehicles more accessible to all.”

Scott also highlighted the importance of addressing the state’s ongoing opiate addiction crisis. He said his administration would work to increase the number of treatment providers and help people in recovery find employment.

The governor didn’t give Democratic leaders much to criticize.

"A lot of the policies that he was mentioning are things that we are working on and we have been working on together. So I don’t think there were any surprises in his speech," House Majority Leader Jill Krowinski (D-Burlington) told reporters later Thursday.

Both Krowinski and Ashe said they shared Scott’s goal of attracting more workers in principle, but Ashe expressed skepticism about the governor’s chances of succeeding. "The rub is every state would like more younger workers in their state and silver bullets to achieve that have been elusive.” Earlier attempts, he said, have cost a "tremendous amount of money with very little payoff."

The Democratic leaders also doubted whether Scott could deliver on his agenda without making harmful cuts elsewhere. "We don’t have any details on exactly how he’s going to be paying for these programs," Krowinski noted.

Referring to Scott’s stated aim of promoting "economic growth and affordability, while protecting the vulnerable," Ashe said, "I think this is going to be more of a gut check year about what actually is meant by 'protect the vulnerable.'"

Although his firm no-taxes-or-fees stance was almost certain to lead to clashes with the Democrat-led legislature, Scott concluded his speech with a plea for civility, cautioning against “the instinct to retreat to ideological corners.”

He earned the loudest bipartisan applause after saying, “We must do everything we can to pull our nation out of darkness and restore civility and respect to our public process … We can work together towards consensus whenever possible, and compromise when its required.”