Vermont Senators Get Schooled on Sexual Misconduct | Off Message 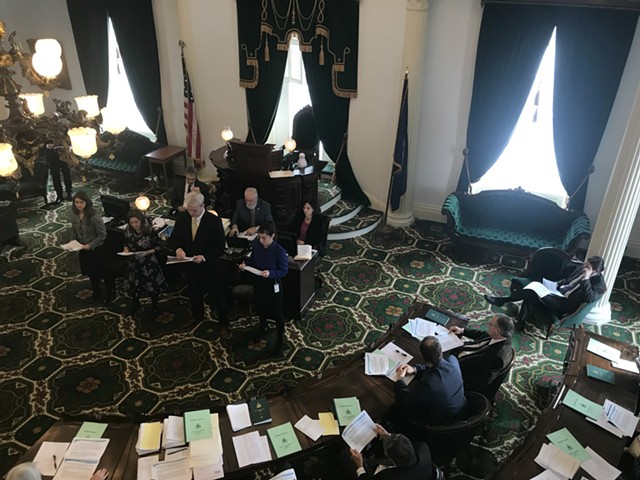 The first day of the legislative session is often like the first day of school: After months apart, handshakes and back-patting abound. That wasn’t the case Wednesday in the Vermont Senate chamber, where an unusual forum focused on unwelcome personal touches and conduct that crosses the line into sexual harassment.

After opening formalities in the Senate, Lt. Gov. David Zuckerman turned the floor over to a group of legislative lawyers who provided lawmakers details on the Senate's sexual harassment policies — and the process that's followed if allegations are made against a senator.

Five attorneys from the Office of Legislative Council held the floor for more than an hour, explaining the policies that govern senators' conduct both inside and outside the Statehouse.

“Eight years ago, I was pregnant in this building,” she said, noting that pregnant women often hear more than they usually do about their bodies. “But in my own experience, I was told by a female lobbyist in front of a group of people in [a Statehouse meeting room] that, at six months pregnant, I must be having twins because I was so huge.”

Carbee was not pregnant with twins, and she said comments such as that can disrupt a person’s work even if there is no ill intent.

The presentation focused on specific examples of sexual harassment, from obviously problematic butt-smacking to more nuanced issues such as the phrasing of compliments about outfits.

The Senate and House have overlapping but slightly different policies on sexual harassment, said Legislative Council director and chief counsel Luke Martland. Senators’ behavior is governed by the Senate's policy, which includes a panel overseen by Sen. Becca Balint (D-Windham) that has the power to conduct confidential investigations.

The Office of Legislative Council made some changes over the past year by naming a group of facilitators among its staff who are experts on the policies. Martland told senators the goal of that change was to provide victims of sexual harassment access to a broader variety of trained professionals, in case they're not comfortable approaching male supervisors in the Office of Legislative Council.

Nobody was lobbying in favor of sexual harassment, but the discussion made it clear that increased attention to the issue has created some awkwardness in the Statehouse.

Sen. Dick Sears (D-Bennington) said confidentiality makes sense as a protection for those targeted by sexual harassment. But he said that things got awkward for innocent senators in December when Vermont Public Radio reported that an unnamed sitting senator had been accused of misconduct. Sears argued that the confidentiality made it impossible for Vermonters to know if their senator had been investigated for wrongdoing.

“Because there’s only 30 of us, any one of us might be the one who’s the subject,” Sears said. “And so we’re all under a cloud.”

Senate President Pro Tempore Tim Ashe (D/P-Chittenden) said Balint’s sexual harassment panel, in addition to investigating allegations of wrongdoing, is looking for ways to improve the sexual harassment policy. Ashe asked senators to raise concerns or questions they have about the policy with members of the panel to inform that work.