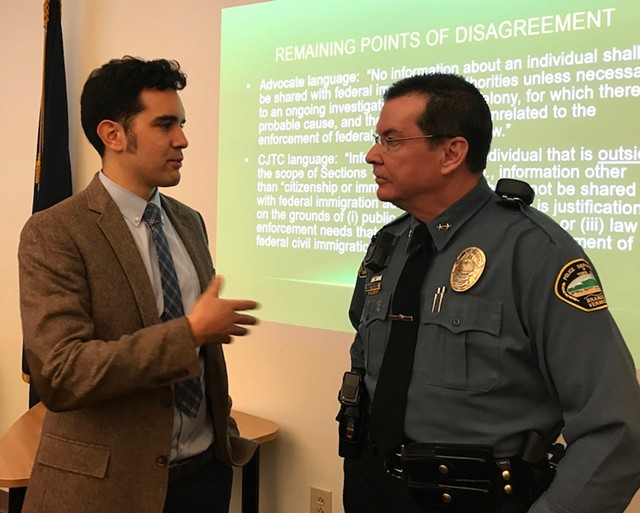 Vermont’s Criminal Justice Training Council on Tuesday unanimously approved an updated Fair and Impartial Policing policy to serve as a model for law enforcement agencies across the state.

The policy is meant to prevent cops from discriminating while interacting with the public, but civil liberties and immigration advocates say the new rules actually remove protections from a 2016 version.
The changes allow local police to tell federal immigration officials if they discover that victims or witnesses of a crime are in the United States illegally. The previous version encouraged officers to avoid doing so. The original earned Vermont Public Safety Commissioner Thomas Anderson a letter in November from the U.S. Department of Justice, which threatened to withhold federal funding if the state did not update its policy.

Miguel Alcudia, who attended the council’s meeting with the advocacy group Migrant Justice, said he was unhappy with the result.

“Many of us, if we’re victims of a crime or witnesses to a crime, we’re going to have fear to come forward and denounce that crime because instead of focusing on the criminal activity, they’re going to be able to focus on the victim’s immigration status,” he said through an interpreter. Alcudia himself was detained by federal Immigration and Customs Enforcement officers in September 2016 while leaving the dairy farm on which he worked.

Christopher Brickell, the chair of the Vermont Criminal Justice Training Council and the Brandon police chief, said it’s illegal to enact a policy that prohibits local police from passing information to the feds.

“We don’t want to overstep that bound of doing something that would be against federal law, but we’re truly trying to recognize those concerns that those communities have,” Brickell said. “And I think what gets lost here is that this is not a policy that protects 1,500 migrant workers in this state. This is for everybody in this state. It’s fair and impartial policing, so it’s not about a specific population. It’s about every citizen that we come into contact with.”
Advocates pointed to an August traffic stop by the Franklin County Sheriff’s Department to explain why the protections are important to immigrant communities. Video of the incident showed a deputy calling for U.S. Border Patrol on his radio as soon as he learned that the driver of a truck did not speak English and did not have a Vermont driver's license. Federal agents can be heard using the term “wet” — apparent shorthand for the ethnic slur “wetback.” The council’s unanimous vote belies concerns among police, and even within the Criminal Justice Training Council, that the state’s Fair and Impartial Policing policy should actually be separate from state policy that governs immigration enforcement. Colchester Police Chief Jennifer Morrison made an impassioned plea to the council to separate the two concepts. She said police in Vermont encounter immigration law very rarely — especially officers far from the Canadian border — but they are duty-bound to do their jobs in a fair and impartial way all the time. “What I’m trying to point out is [immigration is] a tiny, narrow sliver of what we do,” she said. “Fair and impartial policing infuses everything we do from the minute we come on to a police agency to the day we retire.” Brickell said the council’s mandate from the legislature was to update the existing Fair and Impartial Policing policy, which was adopted in 2016. That version addresses immigration enforcement, and lawmakers did not direct the council to form separate immigration policy. “So I think we did our best to meet the legislative mandate of adopting a fair and impartial policing policy that includes immigration enforcement, which we would rather have separated out, but nonetheless it’s part of the policy and that’s where we’ve gone,” Brickell said. “We’ve met the legislative mandate.” Will Lambek, an organizer for Migrant Justice, said the August traffic stop illustrates exactly why immigration enforcement policy and Fair and Impartial Policing are inseparable.

“The reason why immigrant communities are concerned about protecting their rights is because they’re being discriminated against,” Lambek said, “and that’s exactly what we saw in the Franklin County Sheriff Department stop of Luis and Hernando Cordoba, where, based on their Mexican ID, Border Patrol was called to the scene and used racial slurs against them, so you can’t separate this from questions of discrimination. It’s part and parcel.”