A comment submitted to the Federal Communications Commission says Sen. Patrick Leahy (D-Vt.) is a staunch opponent of Obama-era net neutrality rules designed to protect the open internet. The only problem: Leahy is a longtime vocal proponent of net neutrality, and he had no idea there was a comment filed in his name.

“Oh, my God. I wasn’t aware of that,” Leahy said when he was asked Sunday about the comment. “I have been a consistent and noisy proponent of net neutrality.”

The FCC is collecting comments from the public as the five-member commission decides whether to proceed with a proposal from chair Ajit Pai to reverse regulations designed to protect net neutrality.

Donovan’s office created an online portal that allows Vermont residents to search for fake FCC comments filed in their names and then report them to the Vermont Attorney General. Donovan also advised people who find fake comments filed on their behalf to contact the FCC.

“A free and open internet is the lifeblood of modern commerce, and consumers expect transparency and fairness when they go online,” Donovan said in a news release. “Vermont’s small businesses and startups rely on it to be competitive in the global economy and our citizens rely on it for goods, services and information.”

Chris Curtis, the assistant attorney general working on the issue, said net neutrality is vital for the state's economy. “We cannot have Vermonters and small businesses stuck in the breakdown lane for lack of affordability or lack of access,” Curtis said. The fake comments are problematic because of more than the point of view they advocate, he added. “What really lies underneath all of this is that a vibrant democratic process … really relies on the people being able to weigh in and make their views known so that policymakers and decision makers have an understanding of what the public wants and needs.” 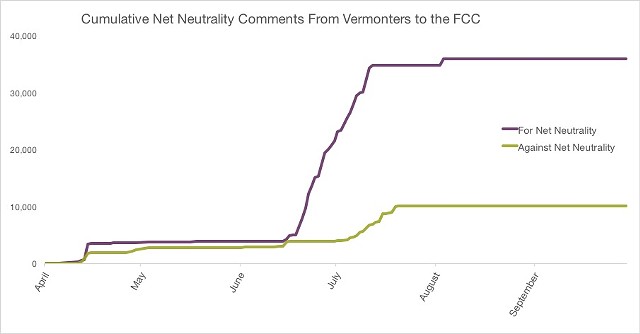 Leahy held a hearing on net neutrality at the University of Vermont in 2014, and numerous Vermont business owners testified in favor of net neutrality rules that require internet service providers to treat all internet traffic equally.

Thousands of the apparently fake comments are voicing opposition to net neutrality. The comments take the position favored by large internet service providers and industry groups: They say net neutrality rules amount to government overreach that will stifle innovation.

When Seven Days told Leahy that a similar comment had been filed on behalf of the Northeast Kingdom ski resort Jay Peak, the senator laughed aloud. (A spokesman for Jay Peak confirmed that the comment is fake.)