Leahy, Sanders Call for Franken to Resign Over Sexual Misconduct Claims | Off Message 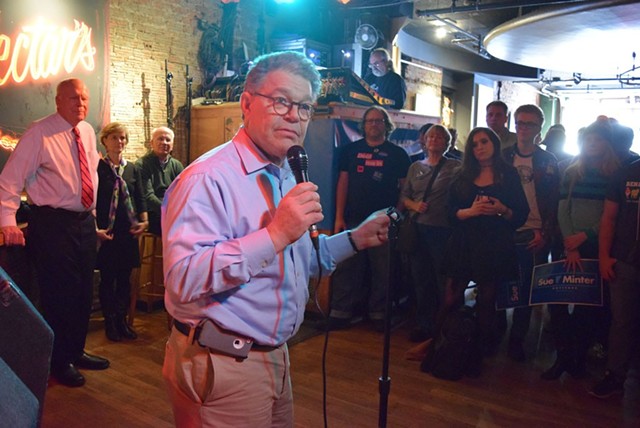 Vermont’s two U.S. senators on Wednesday joined a growing chorus of their colleagues calling for Sen. Al Franken (D-Minn.) to resign over allegations of sexual misconduct.

Calling Franken's continued service in the U.S. Senate "untenable," Sen. Patrick Leahy (D-Vt.) said in a written statement, "He has to step aside." In a separate statement issued later Wednesday afternoon, Sen. Bernie Sanders (I-Vt.) said, "The right thing is for him to resign."

A friend and ally of Franken's, Leahy initially dismissed calls for his colleague's ouster after a California broadcast journalist accused the Minnesota Democrat of forcibly kissing and groping her.

"I don't condone this action, nor does he," Leahy told Seven Days late last month. "He's apologized rather profusely, and, in fact, he asked for an Ethics Committee investigation before anybody else did. He's been a very effective senator."

Asked directly whether Franken should resign, Leahy said at the time, "Then is Donald Trump going to resign, when he's admitted to doing a lot more? I say that rhetorically. Let's see what the Ethics Committee comes up with."

In the weeks since, several more women have accused Franken of inappropriate behavior. On Wednesday, Politico reported that a former congressional aide accused Franken of attempting to forcibly kiss her in 2006, before he was elected to the Senate. That prompted 10 female Senate Democrats to issue a joint call for Franken to resign — and it prompted Franken’s office to schedule an announcement for Thursday. Leahy soon issued his own call for his colleague’s resignation.

"I just learned of the latest, disturbing allegation against Senator Franken," the Vermont senator said Wednesday. "While the facts from case to case can differ, and while there are sound reasons for weighing evidence in such cases in a deliberate and carefully considered process, Senator Franken’s situation has become untenable. I am concerned that even a prompt Ethics Committee investigation and recommendations will not come soon enough. He has to step aside."

In his own statement Wednesday, Sanders said the nation was at a cultural "crossroads."

"The way we treat women in our country has been abysmal in almost every way," he said. "We are finally addressing the issue of sexual harassment, and we need to get it right."