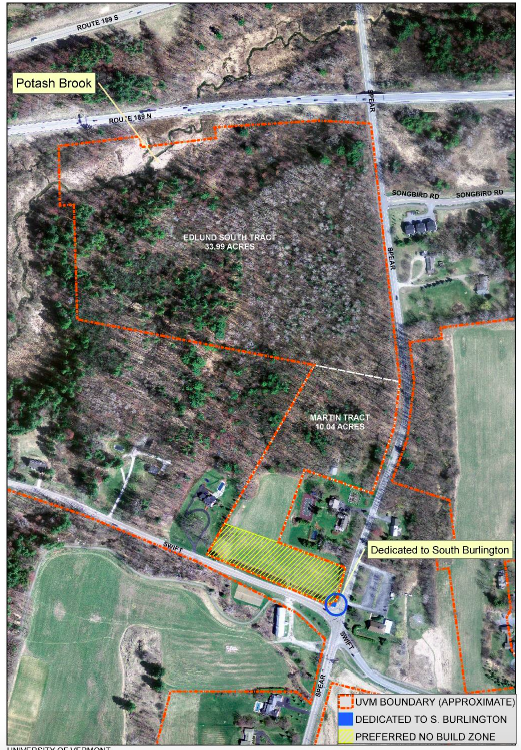 The University of Vermont has finalized terms to sell 44 acres in South Burlington to a private housing developer for at least $3 million. Up to 176 units could be built on the property, near the corner of Swift and Spear Streets.

A land swap is an element of the deal, which was signed Monday. Under the contract, developer Frank von Turkovich will give UVM 22 acres of land adjacent to the UVM acreage he plans to acquire.

The 22 acres are at 150 Swift Street, next to the UVM East Woods natural area. UVM will use the new land for walking, biking and other recreation, according to the contract. It could also be used for parking and for restrooms for the recreation area, and for utilities serving the new housing.

The final purchase price could be more than $3 million, but it's unclear how much more. The university blacked out a clause defining a "supplemental price" that can be added to the $3 million, subject to various conditions in the contract with Swift & Spear Associates, where von Turkovich is manager.

One of the conditions is that the development not exceed 176 housing units.

Seven Days obtained the contract in a public records request.

The closing will not take place until von Turkovich, a South Burlington resident, obtains local approval for the housing as well as a state environmental permit under Act 250.

Von Turkovich must convince the city to change the zoning for a portion of the land. He has until January 31, 2019 to obtain the zoning change and April 30, 2020 to obtain municipal and state permits under the contract deadline.

Otherwise, UVM can back out of the deal.

The South Burlington Land Trust came out against the sale after UVM issued a request for proposals earlier this year. The group has contended that dense housing is inappropriate in the area, and that it would disrupt animal habitat in the East Woods natural area. Water quality problems in Potash Brook could worsen, critics say.

UVM has argued that the land is only a few miles from downtown Burlington and would provide much needed housing.

In a statement released by UVM, von Turkovich vowed to work closely with residents of South Burlington:

As a local developer and neighbor of the site, I am looking forward to sharing our vision of the project, one that includes adding needed homes to the neighborhood while also adding features such as expanded networks of walking and biking trails that will enhance the quality of life. As we are in the beginning stages of developing the proposal, we have a unique opportunity to have a conversation with local groups to refine our project and ensure it respects the community’s values prior to entering the city’s regulatory process.

The contract gives UVM the option to buy or rent the new housing units. UVM would have a similar opportunity at a different von Turkovich development close to campus in Burlington, on Colchester Avenue.

UVM vice president for executive operations Gary Derr said the redacted information in the contract was exempt from public disclosure in an email to Seven Days. Enrique Corredera, UVM executive director of news and public affairs, would not provide details on the supplemental price or offer additional information on why it was blacked out.

Seven Days is appealing the redaction.

UVM selected Swift & Spear Associates because their proposal most closely fit with the institution's vision for the development of new housing, according to UVM's statement.

"The proposal adds needed homes to the community, at the right scale, and adds value to the overall neighborhood through an expanded walking and biking trail network and the enhancement of our East Woods Natural Area,” said John Evans, UVM senior adviser to the president and provost.