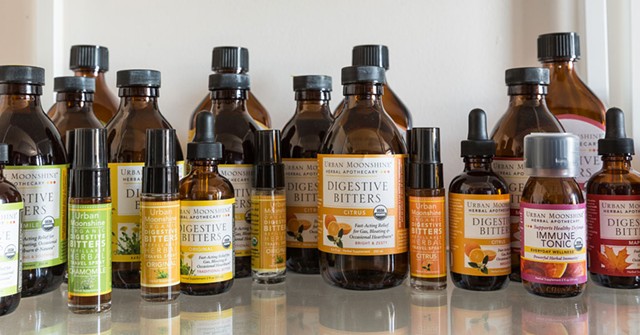 The Burlington bitters and tonic company Urban Moonshine has been sold to Traditional Medicinals, which claims to be the largest organic tea company in the U.S.

“The world needs more herbs and this is our best way to do it,” said Urban Moonshine founder Jovial King, who started the business nine years ago, brewing tinctures in her kitchen.

Today, Urban Moonshine products can be found in co-ops and health food stores around the country, and in some chain stores including Whole Foods Market. It does more than $2 million in annual sales.

Despite the popularity of its herbal remedies (some of which conveniently double as cocktail ingredients), the company has faced financial hardship.

“When I was a young herbalist concocting things in my kitchen, going to the farmers market, I was really starry-eyed about what it would take to build a brand,” King said.

King’s conclusion: “It’s tough to be small in a heavily regulated industry.”

Urban Moonshine passed its latest FDA inspection, she said, but it’s continued to “struggle with profitability” in what has become an increasingly competitive market.

This summer, she faced the choice of recruiting investors to shore up the company, or selling. “We could continue in our beat-up canoe,” she said. But “there on the horizon you see the 90-foot catamaran [asking] ‘Do you want a ride?’”

That “catamaran” was cofounded 43 years ago by Rosemary Gladstar, a legendary herbalist who now lives in Vermont, and who actually trained King when she was a budding herbalist. The company is known for its medicinal teas, including “Smooth Move” and “Mother’s Milk.”

“They’re kind of our dream partner,” King said. The feeling is mutual. Traditional Medicinals CEO Blair Kellison told Seven Days, “In 43 years we’ve never found another company that we felt was as likeminded.”

Not only does the larger company have a “lab full of scientists” to ensure FDA compliance, it distributes to 70,000 stores in the United States, Canada and Mexico, making it well-positioned to bring Urban Moonshine products to the masses.

King, who isn’t disclosing the sale price, said she and her chief herbalist, Guido Masé, are staying on with the company. At some point, she foresees having to lay off other members of the 12-person team, a process that she promises will come with plenty of warning and severance packages.

“That’s the hardest part,” she said.