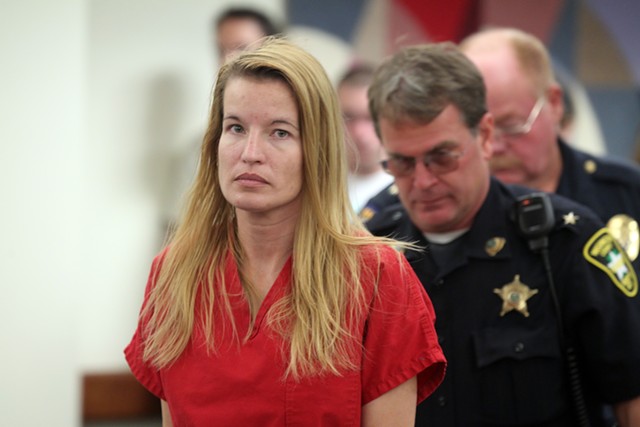 The woman who murdered a Department for Children and Families worker and three others led a life full of tragedies that included the mysterious death of her father and the loss of custody of her daughter, witnesses said Monday.

On the opening day of Jody Herring's sentencing hearing in Washington Superior Court, several of her family members took the stand and described a family riven by physical, mental and sexual abuse for generations.

As a young girl, Herring was generally happy and especially close with her father, David Herring, witnesses said. He died in 1979 after he was shot in his backyard, and his death was ruled a suicide. But Jody Herring, who was 5 years old and home at the time, and other family members have long believed that he was murdered, witnesses said.

A few months before he died, David Herring told several people that he was being threatened, and he slept with a firearm under his pillow, witnesses said. Additionally, the gun found in his hand appeared to have been planted, witnesses said.

After her father's death, Jody Herring suddenly began experiencing seizures. She did not receive any mental health treatment.

"She stared into space like she wasn’t aware of anything," her aunt, Sharon Johnson, testified.

"She always had a dead look to her, like she just wasn’t happy anymore," another aunt, Sandra Herring, testified.

Jody Herring was later kicked out of her home in her preteen years. She lived in a car for a time, relatives testified.

Herring showed little emotion during the hearing. She faces life without parole after pleading guilty in July to one count of first-degree murder and three counts of second-degree murder.

Herring shot DCF worker Lara Sobel, 48, in downtown Barre as revenge for DCF taking custody of her 9-year-old daughter. Hours later, police discovered that she had murdered three of her own family members — her aunt, Julie Falzarano, and cousins Regina Herring and Rhonda Herring — at a home in Berlin.

In the days before the killings, Herring was reeling from losing custody of her daughter, and "fixated" on proving that her dad was murdered, Sandra Herring testified.

Her defense is focused on two areas: her troubled personal life, and what her attorney contends was a failure by the state to treat her obvious mental health issues.

In court filings, her attorney, David Sleigh, has said that Herring was "erroneously" released from inpatient psychiatric care shortly before the killings, after being found to be suicidal. Instead staying in a hospital for 90 days, Herring was released from Rutland Regional Medical Center in what Sleigh called "one of biggest failures of the mental health system" in Vermont history.

Correction, November 13, 2017: Sandra Herring, one of Jody Herring's aunts, was misidentified in an earlier version of this post.