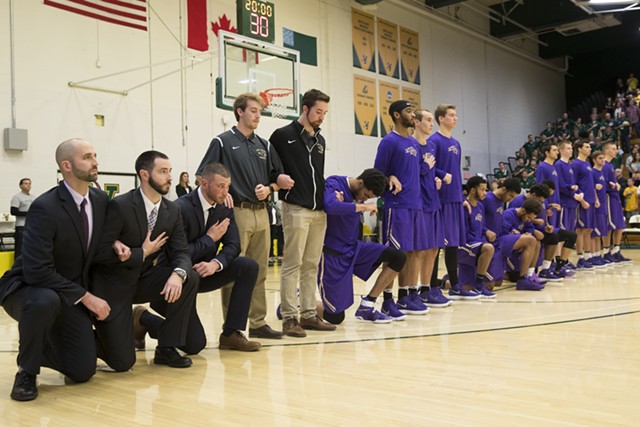 A mostly white audience jeered as a group of black Saint Michael's College basketball players took a knee Saturday for the national anthem before an exhibition game with the University of Vermont.

Spectators shouted "stand up" and loudly booed as half a dozen athletes kneeled as the song played. The protest mimics that carried out by National Football League players who have sought to bring attention to racial injustice and oppression of black Americans by refusing to stand during the anthem. No UVM players appeared to kneel.

Not everyone in the crowd at UVM's Patrick Gym was critical, video footage from the scene shows. Some audience members clapped as the players kneeled, and yelled out in support of their right to protest. St. Michael's basketball coach Josh Meyer, who is white, took a knee, as did at least two other members of the coaching staff.

The negative crowd reaction "really pained" a black UVM basketball player, who tweeted about the incident after the game.

Really pained me to hear what some members of our home crowd had to say to the young men taking a knee during the anthem..

"140 characters isn’t enough to do this issue justice but just know I wasn’t the only one who heard it and this is far from over," Skyler Nash wrote Saturday. "We’ll be back November 22nd just wait on it..."

Around the country, "taking a knee" has become a powerful and controversial protest movement. Some football fans have cheered athletes for bringing attention to racism, while others see the refusal to stand during the anthem as disrespectful and unpatriotic. President Donald Trump has urged NFL owners to fire players who don't stand for the anthem.

Former San Francisco 49ers quarterback Colin Kaepernick started the movement in 2016 to protest racial injustice. The demonstration has since spread to teams throughout the league, especially in light of Trump's comments in September. The trend has gained ground with players on some college and high school teams around the country.

Meyer, the St. Michael's coach, did not immediately return a message seeking comment, nor did the college athletic director, Chris Kenny.