Ed Flanagan, a former state senator and state auditor who was in a debilitating car accident in 2005 died Friday, according to Rep. Mary Sullivan (D-Burlington), a longtime friend.

Flanagan, 66, had been living in recent years in a New Hampshire nursing home.

As a Democratic state senator representing Chittenden County from 2005-2011 and as state auditor from 1993-2001, Flanagan was known for his ardent liberal views. He was the first openly gay statewide elected official in the country. He ran unsuccessfully for the U.S. Senate in 2000 against incumbent Jim Jeffords, who was then a Republican.

Sullivan, who met Flanagan when they were in their 20s, said she remembered him as a loyal friend who was good at telling jokes. She was on her way to visit Flanagan, who she knew was failing, when he died, she said.

Flanagan suffered from a traumatic brain injury and physical ailments as the result of the November 2005 crash. He had been on his way home from Montpelier wh 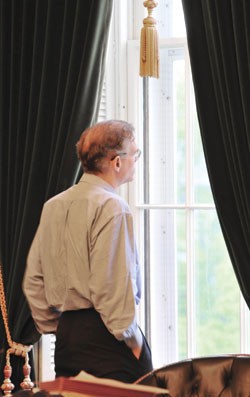 en his car slid off Interstate 89 in Richmond and into a ravine. He hung upside down in subfreezing temperatures for 18 hours before being rescued. He spent three weeks in a coma.

At the time, his older brother, Robert, called his recovery “miraculous.” Flanagan returned to the legislature in 2006 and was twice reelected to serve two-year terms.

Though Flanagan functioned well at times, he also struggled physically and mentally.

In recent months, Flanagan had been using a wheelchair and his health was in decline, Sullivan said. He is survived by his partner, Isaac Lustgarten. His family plans to hold a memorial service in Burlington, Sullivan said.