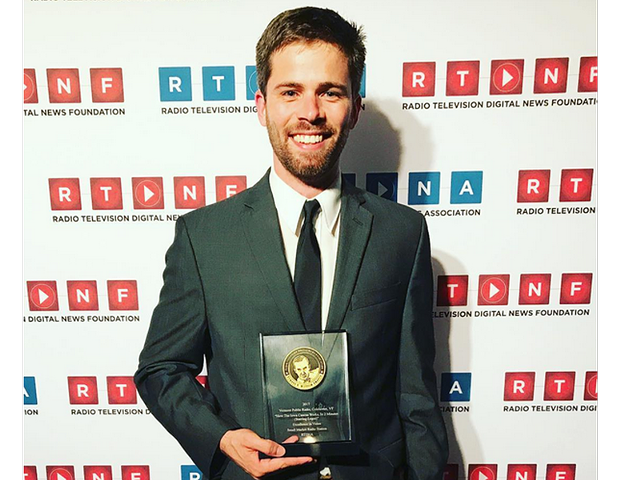 Well, that was fast.

On Wednesday morning, Seven Days announced that Statehouse reporter Terri Hallenbeck would leave the paper on November 3 for a position at Middlebury College.

Here it is, Thursday morning, and Seven Days is ready to announce her replacement.

Taylor Dobbs, who’s been a digital reporter at Vermont Public Radio since 2013, will join Seven Days in early December. He will take on an investigative reporting role and cover the Statehouse when the legislature is in session.

“Taylor’s not going to sit around in a newsroom,” said Seven Days publisher and coeditor Paula Routly. “He’s eager, ambitious, inventive and plugged in.”

The 27-year-old Dobbs has earned several journalism awards, including one for a story about the opiate crisis, as well as a national Edward R. Murrow Award for a video explaining the Iowa caucus using Legos. Earlier, while studying journalism at Northeastern University, he reported on the Boston Marathon bombings; his work was picked up by news outlets including CNN, ABC, the BBC World News and the Burlington Free Press. He also completed two summer internships at VTDigger.org, where he learned his way around the Statehouse.

So the question arises: Why leave VPR for Seven Days?

“VPR is a great place to do journalism,” Dobbs says. “The opportunity to cover the Statehouse and jump into that whole world is appealing. It’s also a gig where ‘investigative’ is on the business card, so to speak.”

He welcomes the chance to do more long-form journalism in a place that’s less tied to daily production, a necessity in the radio biz. And he cites one Seven Days staffer he’s especially anxious to work with.

“I’m familiar with Andrea’s work online,” he says of Andrea Suozzo, our digital editor and doyenne of all things web, social media and data. “I’ve loved working with the web developer at VPR, and I’m excited to work with Andrea to figure out what news looks like in the digital age, and new ways to communicate it.”

Get your Legos ready, Andrea.