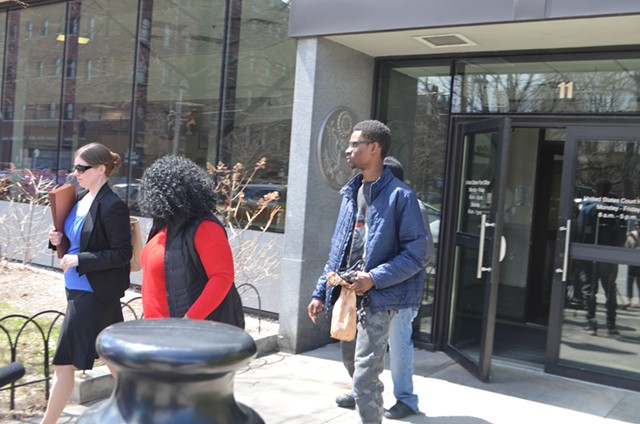 A South Burlington High School student will likely avoid prison time and spend five years on probation after pleading guilty Friday to threatening to kill students and staff in April.

Josiah Leach, 19, appeared briefly in U.S. District Court in Burlington and agreed to the plea deal.

Federal prosecutors and Leach's defense attorney recommended that Leach be sentenced to time served and five years probation. Judge Geoffrey Crawford accepted the agreement, and Leach will be formally sentenced in February.

Leach faced a five-year maximum sentence on a charge of threatening by means of interstate commerce. He spent 10 days in prison — after his arrest, and when he was found to have violated his conditions of pre-trial release.

He published a kill list online, prompting days of school lockdowns and inflaming a community bitterly divided by a debate about the school's Rebels mascot. Leach, who is African American, was charged with making threats to kill students and staff in retaliation for the decision to drop the nickname.

Leach did not have any weapons and did not take any steps to carry out his threats, authorities said.

Leach told Crawford that he is undergoing mental health counseling and working at a local Denny's restaurant.

According to court documents and attorneys' comments in court, Leach has long been a troubled kid. He told authorities that he "felt his life was over" and that "he had been treated as a joke and he wanted the community to feel as he felt," prosecutors said in court earlier this year.

Leach did not have a criminal record, but previously served two stints on juvenile probation for undisclosed offenses. He had been involved in school fights, and had run away from home several times.

Leach, who has spent his entire life in Burlington and South Burlington, suffers from anxiety, depression and other mental health woes, and had an abusive father, his attorney, Elizabeth Quinn, said during a court hearing earlier this year.