McAllister Gets Probation, Not Prison, for Prostitution-Related Charge | Off Message

McAllister Gets Probation, Not Prison, for Prostitution-Related Charge 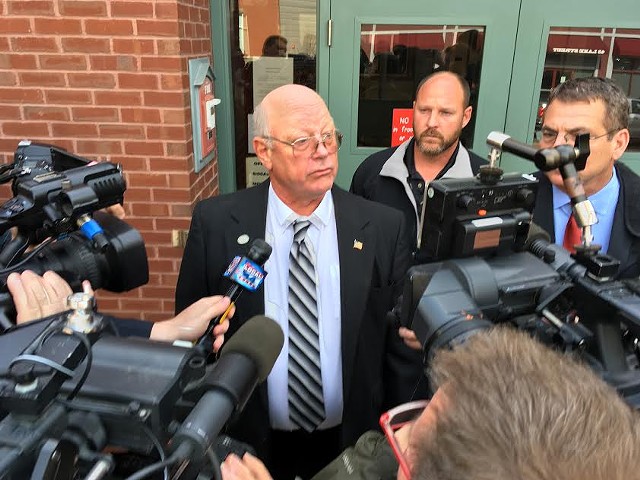 Former state senator Norm McAllister got no prison time but was sentenced to serve one year of probation during a hearing Tuesday in Franklin Superior Court.

Judge Martin Maley rejected prosectors' request to send McAllister to prison for nine to 12 months. The judge said it would not be "proportionate" to the misdemeanor crime of prohibited acts.

A jury in July convicted McAllister of arranging for a friend to have sex with a woman who lived in a trailer on his Franklin County farm, but acquitted him of another charge of prohibited acts and of felony sexual assault, which carried a potential life sentence. The charges involved the same woman.

Maley sentenced McAllister, 66, to probation and 25 days on a work crew, and ordered him to undergo sex offense therapy as ordered by probation officers. McAllister was also ordered to stay away from the woman. A suspended sentence of nine to 12 months could be imposed if McAllister violates any probation conditions.

McAllister is appealing his conviction to the Vermont Supreme Court. His attorney, Bob Katims, asked Maley to delay imposing the sentence until the appeal is resolved. Maley did not rule on that request Tuesday.

McAllister declined to speak before Maley sentenced him. But as he left the courthouse, he told a scrum of reporters, "I was innocent of all of it. I think they got this wrong and we're going to appeal it."

He declined to answer follow-up questions.

Charges against McAllister were litigated in two separate trials. McAllister's first trial, based on sexual assault claims from another alleged victim, ended in June 2016 after that woman admitted she lied under oath during the trial. Prosecutors dropped the charges.

McAllister initially agreed to a plea deal as his second trial loomed, and pleaded no contest to amended charges of lewd and lascivious conduct and two counts of prohibited acts. He stood to serve up to seven years in prison. But he fired his lawyers and successfully sought to withdraw his plea. That led to the second trial, and his conviction.

In court Tuesday, Deputy Franklin County State's Attorney John Lavoie argued that the former lawmaker belongs behind bars. The prosecutor said that McAllister could receive intense sex offender treatment in prison. Lavoie also argued that a prison sentence would provide a deterrent to both McAllister and the public.

"Taking into account what we've learned about the defendant through the evidence presented at trial, it is obvious that his attitude towards women —particularly vulnerable women — needs correction and adjustment," Lavoie said. He later added, "The defendant wants to remind you that he's been of service to the community ... and I would remind the court that in this case, a jury of his peers has identified him as a pimp."

Katims argued that, despite widespread outrage about McAllister's alleged actions, he was convicted only of a charge that does not usually result in a prison sentence.

"Anecdotally, trying to think of a case in which a first-time misdemeanor, with no prior criminal history, of Mr. McAllister's age — for the state to even be asking [for prison] ... It would be unprecedented," Katims said.

The victim in the case, who testified at length during the trial, gave a brief statement in court and said that McAllister had "exploited" her.

"As difficult as it was, being able to face my accuser and [demonstrate] what he did was wrong and there are consequences ... made it all worth it," she said.

The allegations precipitated the end of McAllister's political career. The Republican senator who represented Franklin County was arrested outside the Statehouse in 2015 and was later suspended from the state Senate. He ran for reelection, but lost in a primary in August 2016.