Keep BT Local will move on to the final round to buy Burlington Telecom, along with Toronto-based Ting.

About 150 residents crowded into Burlington City Hall Auditorium to voice their support for the co-op's bid. They stood along the walls and sat on the floor, bearing signs with slogans in favor of Keep BT Local.

"How about we keep our internet & just sell Miro instead?" read one, taking a shot at Mayor Miro Weinberger. Read another, "Hands off our internet."

"This is probably the biggest issue you've ever voted on," former Progressive state legislator Dean Corren told the council. "Decades from now, it will seem silly that we considered having something other than local control over the telecom."

Others urged the council to consider the extensive public support for the co-op. Among the lawn signs placed in yards around the city, "You've never seen a sign saying, 'Give it to Tucows,'" said Charles Simpson, referring to Ting's parent company. People applauded and laughed. 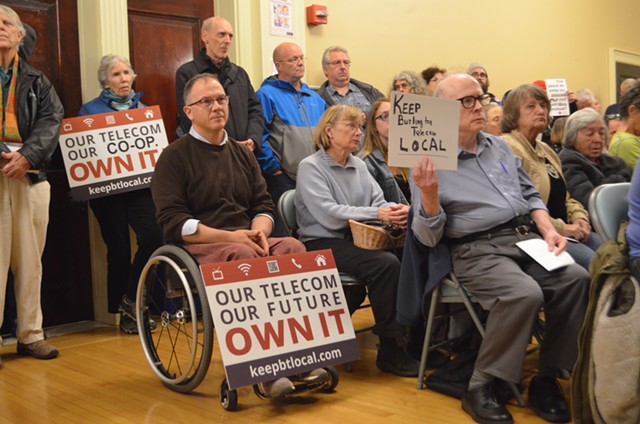 In the end, the two lowest bids for the telecom took the day — the $12 million offered by Keep BT Local and the $27.5 million offer from Ting. Schurz Communications, which is headquartered in Indiana, had bid $30.8 million.

The vote brings closer to conclusion a years-long process to rebuild Burlington Telecom, which fell into legal and financial trouble after then-mayor Bob Kiss diverted $17 million from city coffers to prop it up.

The question has been whether local ownership or strong financial footing for the Telecom holds more appeal.

On Monday, councilors across the board expressed concerns about the financial viability of Keep BT Local's bid. The co-op's $12 million offer would be financed by a loan with a 14 percent interest rate.

"It’s not about fear [of litigation against the city], it's whether there’s legitimate concerns about whether Keep BT Local can pull it off," said Kurt Wright as he explained his unwillingness to support the co-op. "I don’t take those considerations lightly."

Citibank has previously sued the city over Burlington Telecom debt, and will receive sales funds. The bank has indicated that it may sue the city again if it believes it hasn't received its share of profits, added Chip Mason (D-Ward 5).

Still, half the council decided to give the co-op a chance. In spite of the "major hurdles" the co-op faces, "You’ve worked hard to earn my respect," said Dave Hartnett (D- North District), who voted for the co-op. "I’m a hometown guy and I’m from Burlington."

Councilors said that their votes Monday night weren't necessarily an indication of their final choice. The two finalists will continue to refine their offers before the council selects the winning bid on October 30.

Ting and Keep BT Local's bids are the last of eight that were submitted last June. Four advanced to be considered by the council, but one bidder dropped out.

Last week, Weinberger announced that he supported Ting, and asked the council to reject the co-op's bid. Ultimately, "It's not about fear of litigation," Weinberger said Monday. It was about the city making good on commitments to pay back debts, he said.

In the coming two weeks, councilors will continue to weigh their options. Councilor Karen Paul (D-Ward 6) requested an outside analyst to weigh the benefits and risks of the co-op bid that are "out of the realm of conventional economic analysis," including net societal benefits.
Some members of the public also expressed their doubts. Burlington resident Michael Caulo urged officials to consider the "tremendous professional experience" of the "competitive proposals" of the highest bidders. "I'm not sure we can translate the success of a grocery store to the success of an internet system," said Caulo, referring to City Market/Onion River Co-op.

But the public input was what ended up tipping the scales in favor of Keep BT Local, said Max Tracy (P-Ward 2). He read emails submitted by the public. According to Tracy, 186 support the co-op, compared to 20 for Ting and 16 for Schurz.