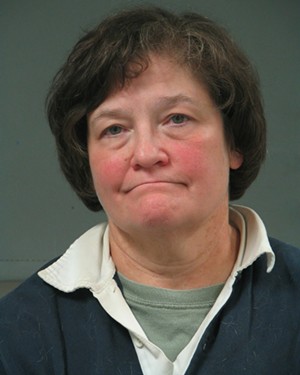 State Sen. Debbie Ingram (D-Chittenden) was arrested Thursday night and charged with driving under the influence of alcohol after allegedly steering her car into a ditch, Williston police said.

Around 8 p.m., Williston police responded to a crash on South Road. Police said that Ingram, an ordained minister and a freshman senator, had gone off the road, struck a "fixed object," continued on and then veered off the road again.

She was cited to appear in Chittenden Superior Court on November 2 on a charge of driving under the influence.

Last night I was arrested near my home in Williston and charged with a DUI. I
am grateful that no one was injured as a result of my irresponsible behavior. I
suffer from a disease for which I have been getting treatment through a 12-Step
program. I had a temporary setback last night and will continue to seek treatment to ensure that something like this never happens again. I accept full responsibility for the consequences of my actions.

Ingram, 55, a Democrat who first won election to the state Senate in 2016, is the executive director of Vermont Interfaith Action, a nonprofit alliance of religious groups. She previously served on the Williston Selectboard.

She lives on South Road in Williston, according to publicly available records. Earlier this year, she pushed for a failed bill that would have raised the legal smoking age from 18 to 21.

Ingram is a graduate of Stanford University and Fuller Theological Seminary, and completed a fellowship at Cambridge University in England, according to her legislative biography.