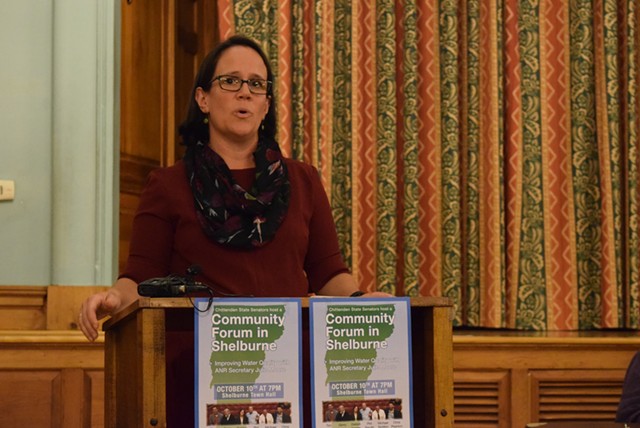 Her boss, Gov. Phil Scott, intends to make the investments needed to meet goals for reducing phosphorus, she said. Chittenden County senators, who sponsored the hearing in Shelburne that drew about 45 local residents, wanted to know if that means Scott will agree to a new funding source to get it done.

Sen. Phil Baruth (D-Chittenden) asked if the governor would require new spending to be offset by cuts to other environmental programs. Baruth noted that Scott made a similar proposal this year in education, when the governor called for increased investments in early and higher education while reducing spending on pre-kindergarten through 12th-grade education.

"I haven't heard that from the governor," Moore said, noting that a legislatively mandated working group is scheduled to produce water-quality funding recommendations by November 15.

Funding for water-quality improvements will be front and center when lawmakers return to Montpelier in January. Democrats who control the legislature are likely to disagree with the Republican governor about how much money to spend and where it will come from.

Sen. Ginny Lyons (D-Chittenden), who moderated the 90-minute hearing, said some, but not all, of Moore's comments were reassuring.

"We are looking for a new funding source," Lyons said. The November 15 report will be telling about where the Scott administration is headed on the issue, she added. 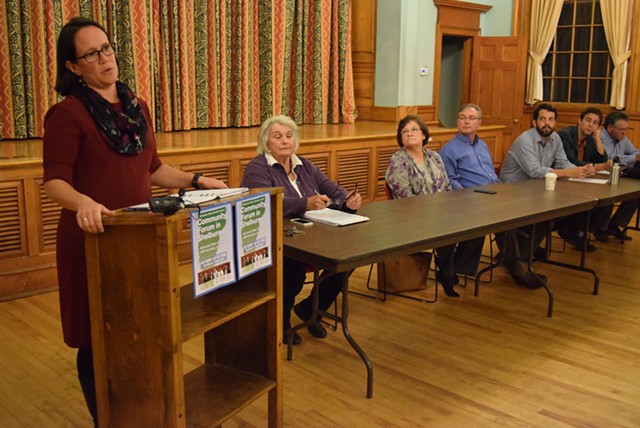 Moore said the state increased water-quality spending by 70 percent this year by using existing bonding capacity in the capital budget. She said that same level of spending should suffice for the next five years.

Lyons was skeptical that limiting funding to that level for that length of time would allow the state to meet federally mandated goals for phosphorus reduction. "That made me feel very apprehensive," she said.

Moore refuted an article VTDigger.org published last month that reported she plans to propose cutting water-quality spending in half. Moore said she has no such plans. She later wrote a rebuttal to the article.

Vermont's degraded water quality was on display once again this year in late summer when significant blue-green algae blooms sprouted in Lake Champlain and Lake Carmi.

Moore attributed those blooms to the weather. A cold, wet spring and an unusually warm late summer stirred phosphorus from long-existing sediment on the lake bottoms.

James Ehlers, a water-quality advocate who is a Democratic gubernatorial candidate running against Scott in the 2018 election, was irked by those comments as he sat silently in the audience Tuesday night. Afterward, Ehlers said, "It's absurd. The rain and snow don't cause pollution. Bad industrial dairy practices do."

The hearing was one of two that Chittenden County senators plan this week. At a meeting Wednesday night — October 11 — the main topic will be on opiate abuse during a forum from 7 to 8:30 p.m. at Camels Hump Middle School in Richmond.