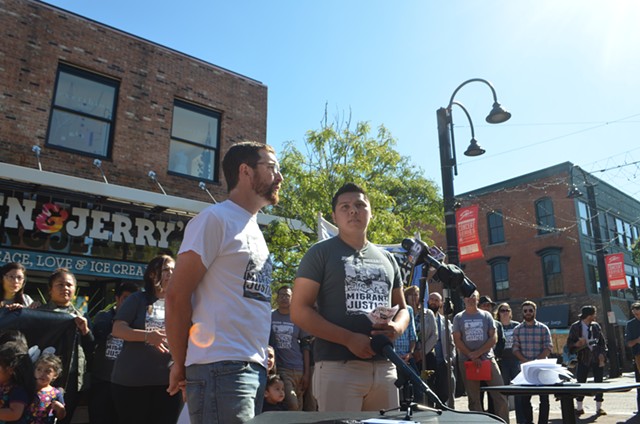 After more than two years of prodding by a local migrant farmworker advocacy group, Ben & Jerry's has agreed to improve employee conditions at the farms in its supply chain.

Members of Migrant Justice and Ben & Jerry's CEO Jostein Solheim announced the deal Tuesday during a celebratory gathering in front of the ice cream shop on Church Street in Burlington. Solheim touted the program as "first in the dairy industry, first in the world."

Then he and members of Migrant Justice signed the Milk With Dignity contract that will eventually be applied to all northeastern farms in Ben & Jerry's supply chain.

"I'm so excited that I don't have the words to describe what's happening," said Olga Benitez, a member of Migrant Justice's farmworker coordinating committee. "This is the first step in bringing about a change for workers so that people treat us with a little more respect, and give us a few more rights. In this country, it's difficult to have our rights respected."

Under the agreement, the Unilever-owned ice cream company will require its suppliers to adhere to the Milk With Dignity code of conduct, which sets standards for wages, work schedule, health and safety, and housing, according to a press release from Migrant Justice.

The contract also creates an independent Milk With Dignity Standards Council, which will monitor and enforce the standards.

The agreement was modeled after the Fair Food Program, which was created in 2011 to provide protections for workers on tomato farms in Florida.

Solheim called the deal the "definition of a win-win-win program" for the company, for farmworkers and for farmers. Ben & Jerry's will absorb the costs associated with the program, Solheim said, and will not pass expenses on to customers.

"This is a program that gives the workers a seat at the table and provides dignity and a real voice, but it's also a program that gives the farmers a community," he said.
Migrant Justice and Ben & Jerry's had been negotiating the details of such an agreement since the summer of 2015. Last June, members of Migrant Justice marched 13 miles from the Ben & Jerry's factory in Waterbury to the Statehouse in Montpelier to press the company to sign the contract.

The decision came two days before a Migrant Justice-organized protest at Ben & Jerry's shops around the country. The organization called off the October 5 National Day of Action after Tuesday's announcement.

Solheim acknowledged that the decision had been a long time coming.

"It's been a long road, but together we've always said, 'Sí se puede,'" Thelma Gomez, the president of Migrant Justice's farmworker coordinating committee, told those gathered.

"Sí se pudo," corrected one farmworker with a grin, changing the chant to the past tense. Not "yes we can" — "yes we could."