Walters: Pot Commission to Discuss Path to Legalization | Off Message 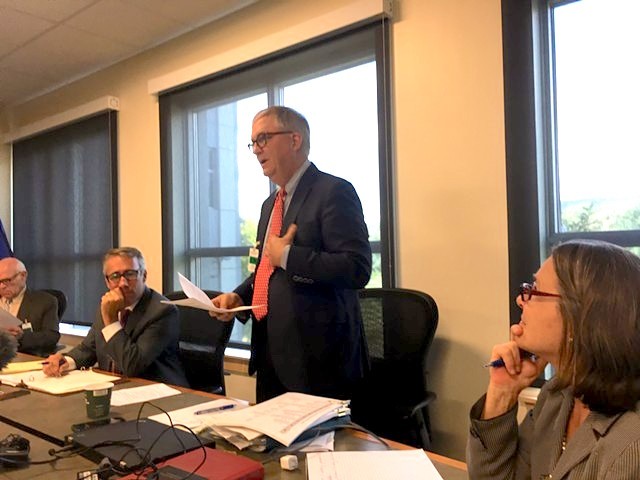 Governor Phil Scott's Marijuana Advisory Commission held its first meeting Thursday and got a very clear charge: Assume that Vermont will legalize cannabis in some way or other, and devise the best and safest way to get there.

"We're going through these meetings with the assumption that some form of legalization is going to happen," said Public Safety Commissioner Tom Anderson. "The question is, how do we address it?"

Other states that legalized cannabis through voter referenda were forced to "build the plane while flying it," said Jaye Pershing Johnson, the governor's legal counsel. "We have the opportunity to build the plane and avoid the unintended consequences that other states have encountered."

The governor created the commission via executive order in August after he vetoed a bill that would have created a legislative commission and established a pathway to legalization. Scott's panel is charged with investigating three primary areas: taxation and regulation, education and prevention, and highway safety.

The commission is operating under a timeline that's tight up front and generous at the back end. Its three subcommittees have until November 15 to assess available research and report back to the full panel. The panel must produce a report to the governor by January 15, in time to inform next year's legislative session — but then has until December 2018 to produce a final report with full recommendations.

State Health Commissioner Mark Levine, who chairs the prevention and education subcommittee, said his group has a twin problem: Existing research is on the one hand "voluminous" and on the other hand sorely lacking on key points. "We'll use the research that exists, and there will be a lot of gaps," he said.

Notable among those gaps: There is no reliable roadside test for cannabis use; there is no established standard for impairment due to pot; and the history of legalization in the United States is too short to have produced much reliable data.

Yet the future is approaching quickly because of one simple fact: Legalization is happening all around us. "We are literally going to be surrounded by jurisdictions where marijuana is legal," said commission cochair Jake Perkinson.

Thursday's meeting essentially laid the groundwork. There was no discussion or debate of issues, only a series of informational presentations with a little time for questions.

After the full commission session, the three subcommittees held meetings of their own.

Several members of the road safety panel noted that cannabis is only one aspect of a broader problem. "I want to look at highway safety in general," said Rep. Maxine Grad (D-Moretown). "We can do better regarding DUI, regardless of what the substance is."

Transportation Secretary Joe Flynn agreed, noting, "Of our 47 traffic fatalities so far this year, 20 had a drug or alcohol component."

The subcommittee had a lengthy list of tasks for the next six weeks. Its areas of concern include identifying a testing mechanism for cannabis, assessing the need for drug-recognition experts in law enforcement, whether there's a need for increased funding for first responders in a post-legalization Vermont and the feasibility of cooperating with neighboring states on shared standards for impairment.

Sen. Joe Benning (R-Caledonia), the sole vocal supporter of legalization on the subcommittee, warned his colleagues not to assume that all these issues are tied to legalization.

"I don't use marijuana, and I never will," he said. "But we have a substantial population that is imbibing. The problems exist whether we legalize or not."

During the 2017 session, the legislature passed a bill to legalize possession or cultivation of small amounts of cannabis. Scott vetoed that bill. And the commission appears likely to back a full tax-and-regulation approach rather than the grow-your-own style.

There's one simple reason for that: money. Members of the road safety and education/prevention subcommittees are likely to identify needs for new programs or increased resources. The third subcommittee, on taxation and regulation, is tasked with identifying sources for funding. The very structure of the commission seems predisposed to a tax-and-regulate system.

The road safety subcommittee will hold at least two meetings between now and November 15. The first is scheduled for October 16 at 9 a.m. in the Department of Public Safety headquarters in Waterbury.