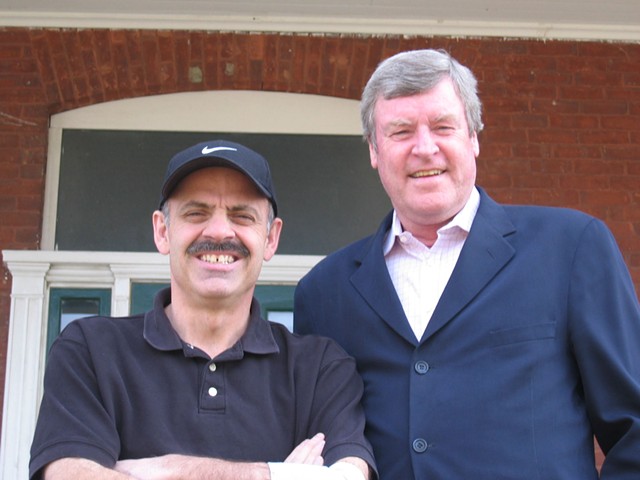 After a long search for the right buyer, Ken Squier found his man working right there next to him.

In a Friday afternoon press release, Squier announced the sale of the Waterbury-based Radio Vermont Group, which includes WDEV-AM and FM, to the firm’s director of sales, Steve Cormier.

“I am thrilled that after 87 years [of Squier family ownership] the station will remain among Vermonters,” said Squier in the release.

Squier’s father, Lloyd, founded WDEV in 1931, and the station continues to offer predominantly local programming. Ken Squier, 82, has worked at the station since he was 12 years old; he also achieved national fame as a NASCAR broadcaster, and he is a member of the NASCAR Hall of Fame.

In addition to WDEV, the Radio Vermont Group also operates 101 the One, which plays classic hit songs, and country station WLVB-FM in Morrisville.

Squier had been quietly looking for a buyer for a couple of years. His search was first reported by Seven Days in June. At the time, he said he was looking for “a Vermonter or some Vermonters who are interested in and dedicated to local programming.”

Cormier would seem to be a good fit. Before joining the Radio Vermont Group in 2015, he was station manager at WTSA Radio in Brattleboro. And that followed a 26-year run in Burlington broadcasting, most famously as cohost of the “Corm and the Coach” morning show.

“Local radio, there’s nothing like it!” Cormier said. WDEV’s local-heavy format, he added, “ain’t going anywhere.” That includes Squier, who does weekday sportscasts on WDEV and the renowned “Music to Go to the Dump By” show Saturdays at 9 a.m.

“I want him there every day,” said Cormier of Squier, who will serve as an advisor as well. “‘The Dump’ show, sports, until he decides he doesn’t want to do it anymore.”

Cormier also plans no changes at WLVB-FM, and minimal changes, if any, at 101 the One.

Cormier professed a personal commitment to maintaining WDEV’s emphasis on local programming. “I’ve worked for Clear Channel,” he said of the nation’s biggest radio conglomerate, now known as iHeartMedia. “I saw what they did. They didn’t care about their communities.”

The sale is subject to approval by the Federal Communications Commission, which is expected to take a few months. Cormier would not discuss the sale price, referring inquiries to Squier, who did not respond to requests for comment.

There will be one departure from Radio Vermont. Eric Michaels, vice president, general manager and cohost of WDEV’s “Morning News Service,” is resigning. Cormier noted that Michaels has “done wonderful things” in bolstering the company over the years.

“For 30 years, Eric has managed to maintain and grow the Radio Vermont Group as a relevant broadcasting voice in Vermont,” Squier’s press release said.

Cormier promised no changes, but he realizes that the broadcasting industry is constantly evolving. And WDEV itself has changed — slowly, deliberately — over time. He plans a collaborative approach to the future.

“There are a lot of bright people at those stations,” he said. “Any major decision I make, I’ll talk to Ken about.”