Walters: Another Hat for Don Turner | Off Message

Walters: Another Hat for Don Turner 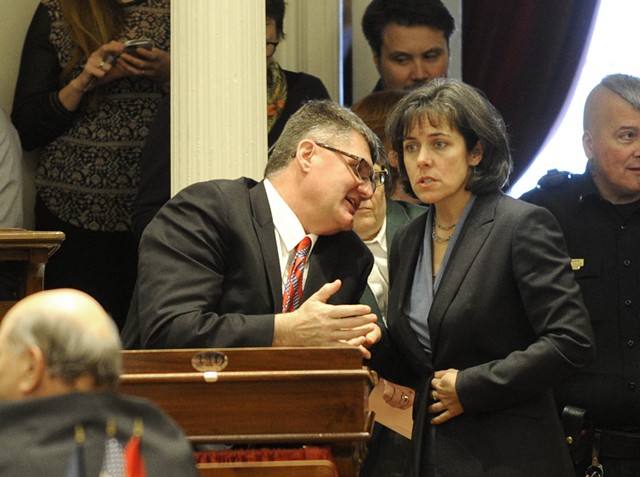 Vermont House Minority Leader Don Turner (R-Milton) has been hired as permanent town manager in Milton. He has no plans to leave the state legislature, despite rumors to the contrary. "I am not done in Montpelier," he says.


Turner, who is also a realtor, a partner in a family construction business, and Milton's fire and rescue chief, has been serving as interim town manager since March. In June, the selectboard named Turner as the sole finalist for the permanent job, but the arrangement wasn't finalized until this week.

Selectboard chair Darren Adams told the Milton Independent in June that Turner's "hat question" would be an issue. Turner acknowledges that being town manager and House Minority Leader "will be a lot of work," even for a guy accustomed to wearing multiple hats. But he will carry on — at least for now.

"It's in my contract that I can continue to serve [in the Statehouse]," he explains. "My understanding with the selectboard is that we will reevaluate my status after the 2018 session. We’ll see."

Turner is removing a different hat: On December 31 he will step down as fire and rescue chief. He will continue to serve as a firefighter, which he has done since he was 17 years old. Also, he says, the family business, Donald H. Turner & Sons Construction, is winding down. It's owned by his 77-year-old father, and won't be taking on any significant new projects.

That 2018 re-evaluation of his legislative service raises questions about caucus leadership heading into campaign season. The Minority Leader has a prominent role in fundraising and candidate recruitment. Turner says his team is ready to step into the breach if he should decide not to seek reelection.

"We worked on that last year," he says. "We expanded our leadership team. I will continue to do what I can, but I won't do as much as in the past."

One major effort is already underway, according to Turner. In the 2016 cycle, a small group of donors joined in a coordinated effort to write big checks to select Republican House candidates. Those donors — gas and oil magnate Skip Vallee, reclusive heiress Lenore Broughton, and Tom and Carol Breuer, who live in Massachusetts but have a second home in Stowe — gave nearly $100,000 to candidates' campaigns and another $16,000 to Turner's Common Sense Leadership PAC.

Republican hopefuls in crucial districts each received $4,000 or more from that small group of donors. In Vermont House terms, that's a lot of money.

Expect a repeat of that effort in 2018. "I'm already working on that," Turner says. "I've opened conversations with people. We're getting the whole team prepared for the next cycle."