On a Big Stage, Sanders Counters Trump on Foreign Policy | Off Message

On a Big Stage, Sanders Counters Trump on Foreign Policy 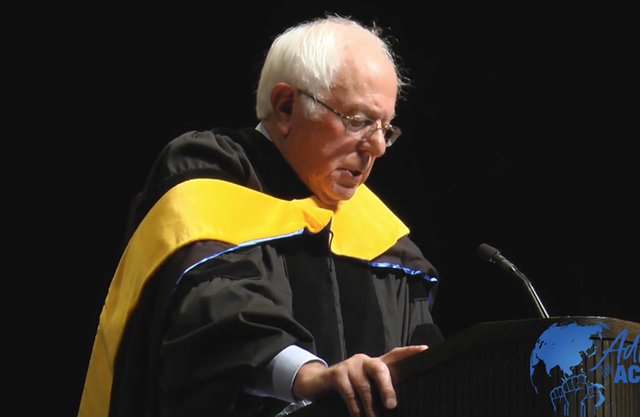 Sanders, who studiously avoided discussing foreign policy during his presidential campaign, chose a high profile and historically significant venue to address the topic Thursday. He made his remarks during same event at which Winston Churchill gave his famous Iron Curtain speech — at the John Findley Green Foundation lecture at Westminster College in Missouri.

Widely considered a potential presidential candidate in 2020, Sanders has cemented his role as a foil to Trump; last week, he grabbed headlines after unveiling his Medicare-for-all health care proposal.

“The goal is not for the United States to dominate the world. Nor, on the other hand, is our goal to withdraw from the international community and shirk our responsibilities under the banner of ‘America first,’” Sanders told an audience of students and faculty. “Our goal should be global engagement based on partnership, rather than dominance.”

Declaring that “the United States must seek partnerships not just between governments, but between peoples,” Sanders offered an example: As mayor of Burlington, he started a “sister city” program with the Russian city of Yaroslavl in the midst of the Cold War.

Billed as a new vision for a progressive foreign policy, Sanders' speech largely consisted of a compendium of familiar points.

He criticized the United States’ history of military intervention, railing, once again, against the Iraq War and calling the War on Terror “a disaster for the American people and for American leadership.” He made the case that “orienting U.S. national security strategy around terrorism essentially allowed a few thousand violent extremists to dictate policy for the most powerful nation on Earth.”

Sanders also criticized the United States’ support for Saudi Arabia’s war in Yemen. He praised the Iran nuclear deal, which was brokered during president Barack Obama’s tenure, and which Trump is threatening to dismantle.