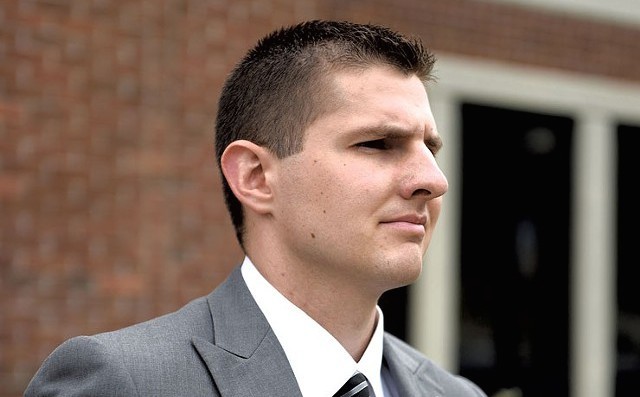 A jury this week found a former Windsor police officer not guilty of charges stemming from the shooting of a drug suspect during an undercover raid in 2014.

Former attorney general Bill Sorrell, who cleared police officers of criminal wrongdoing in most cases during his 20 year tenure, charged Palmer in 2015. But on Wednesday evening, a jury in Windsor Superior Court deliberated for six hours before acquitting Palmer of aggravated assault with a deadly weapon and reckless endangerment charges.

Palmer's attorney Dan Sedon said that prosecutors overstepped in charging his client and were influenced at the time by national controversies surrounding police shootings. The Windsor shooting happened just a few months after Michael Brown was fatally shot by a police officer in Ferguson, Mo.

"It felt like Ryan Palmer was going to be the occasional officer thrown into the volcano to appease the gods of fairness," Sedon told Seven Days.

"You’ve got to step back and look at these cases without emotion, and I don’t think the Attorney General's Office did that," Palmer said. "I think they got caught up in a fervor of anti-police sentiment in the country at the time. I don't think they gave me a fair shot. It was a political prosecution from the start."

"It played no role whatsoever," Levine told Seven Days. "It has never been a factor in any prosecution that's come out of this office. It would be completely unethical for a prosecutor to bring a case for a political reason, and, frankly, what would be the political advantage to bringing a charge against a police officer? There is none."

Wearing plainclothes, Palmer arranged a November 2014 drug bust at a car repair shop in Windsor. Jorge Burgos, who had a criminal record in Vermont and Massachusetts, pulled into the shop. When Palmer and another plainclothes cop confronted Burgos at gunpoint, he sped away in a Honda.

Palmer fired his .40-caliber Glock 22 into the car, wounding Burgos, who then led police on a chase before several cruisers boxed him in about eight miles away in Claremont, N.H.

Palmer said that he fired because Burgos drove directly towards him, putting his life in jeopardy. But prosecutors alleged that footage from the repair shop's surveillance camera showed that Palmer was standing safely to the side of the car when he fired.

Prosecutors said that Palmer wasn’t in imminent danger of serious injury — the standard necessary for officers to use deadly force.

Authorities initially charged Burgos with assaulting a law enforcement officer. But former Windsor County State's Attorney Michael Kainen dropped the charge days later. Kainen told Seven Days in 2015 that when he saw the video, he decided he couldn't prove that Burgos had tried to injure Palmer.

"Originally, it sounded to me as though Ryan was more in front of the car than he was when we watched the video," Kainen said at the time. "It didn't look to me as though we could get a conviction."

Palmer took the stand during the trial and was the only defense witness, the Valley News reported.

"I shot that vehicle to incapacitate what I perceived as a threat of serious bodily injury or death," Palmer testified, according to the Valley News. "I did it to protect myself."

Palmer, a Windsor native and Windsor High School graduate, resigned from the department after charges were filed. He moved to Kentucky, where he now works security for a "large, multinational corporation," Sedon said.

Palmer said the verdict helps bring closure to a dark time in his life.

"I've been able to restart my life," he said.

Levine, for his part, said he's "obviously disappointed in the result."

"These are very difficult cases," Levine said. "Rightfully so, people don’t want to believe that people in law enforcement ... go out and commit crimes. So it's difficult to persuade [jurors] that sometimes it happens. We felt we had an obligation to have a jury look at the facts and make a decision. I respect the jury's decision."