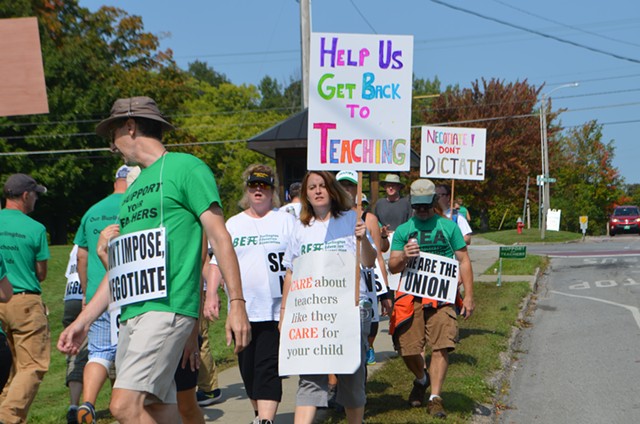 Though school was closed Thursday and Friday, administrators and the Burlington Education Association teachers' union agreed to allow sports teams to play, superintendent of schools Yaw Obeng said. Members of the boys' soccer team petitioned the adults to let the games go on, according to Obeng.

"The homecoming experience is once in a lifetime, " the superintendent told Seven Days on Friday. "This was something they wouldn't get back."

The appeal worked. Coaches who are not teachers will lead the teams.

On Friday, the cross-country team will run in a meet at Essex, while the school will host a boys' soccer game and the varsity football game against rival South Burlington. Field hockey, girls' soccer and volleyball will play on Saturday. All non-varsity games will be rescheduled, the school announced.

The school released the revised weekend schedule during the second day of a teacher strike in the city, meaning no school was in session for the district's 400 teachers and 3,600 students.

On Friday, teachers and faculty picketed across the city, holding signs reading "Don't impose — negotiate" and "We are the union." Cars honked in support as they passed the teachers holding signs in front of the high school on North Avenue.

Meanwhile, negotiations between the school board and teachers appeared to be at a stalemate. The BEA and school district have traded press releases, each accusing the other of creating roadblocks in the discussions. "BOARD'S LAST OFFER IGNORES YEARS-LONG STRATEGY TO GIVE STUDENTS MORE INDIVIDUAL ATTENTION," read the subject line of a BEA email on Friday.

The BEA insists that its teachers be spared from recess and door duty and non-teaching responsibilities to be able to plan for lessons and work with students one-on-one.

During negotiations last spring, the union conceded on the measure "in the 11th hour," said BEA president Fran Brock. This time around, the teachers aren't backing down. "The issue has been studied, the fact-finder even said it's time to implement the changes," Brock said. "We need that time."

On Wednesday, the school board maintained that the union turned down a three-year contract that offered 2 percent raises annually. Board chair Mark Porter did not immediately respond Friday to requests for comment.

Meanwhile, Obeng said, the district will serve students lunches at schools and will help parents coordinate daycare options. "We're trying to be supportive," he said.

Brock said she didn't know whether negotiations would happen over the weekend or how long the strike will last.