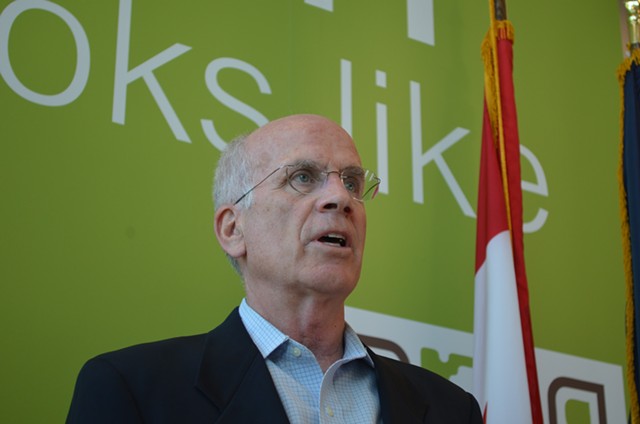 Uncertainty is in the air over Washington, D.C., as top congressional Democrats say they have a deal on enacting into law the Deferred Action for Childhood Arrivals program while President Donald Trump insists otherwise. For Congressman Peter Welch (D-Vt.), it's just the latest example of what he calls "an improvisational president. He goes from meeting to meeting, and whatever happens in that meeting is the news of the moment."

Welch attended a meeting on Wednesday that included Trump and 14 members of Congress, split equally between Republicans and Democrats. Welch describes "a quite surreal atmosphere" in which the president talked of bipartisan action while congressional Republicans continue to freeze out the Democrats.

"The president indicated support for the Dreamers [those early arrivals who face deportation unless DACA is extended], but also mentioned security issues," Welch says. "I urged the president to not link security issues with the treatment of the Dreamers, and said that this calls for a Lincolnesque moment in presidential leadership, where we do the right thing because it’s the right thing."

"We agreed to enshrine the protections of DACA into law quickly, and to work out a package of border security, excluding the [border] wall, that's acceptable to both sides," the two Democrats said in a statement released after the meeting. Trump has long demanded funding for a wall along the U.S.-Mexico border.

Speaking with reporters Friday morning, Trump insisted there was no deal but added that "The wall will come later" — just not as part of a DACA deal.

There is an overlap in the two accounts, which suggests that Trump has agreed — at least in principle — to enacting DACA into law in exchange for some increased funding for border security.

Welch says there is room for such a deal, although he opposed explicit linkage between DACA and border issues.

"There is Democratic support for appropriate border security," Welch said. He pointed to a bill crafted by congressmen Michael McCaul (R-Texas), chair of the House Homeland Security Committee, and Bennie Thompson (D-Miss.), the committee's ranking Democrat. "The bill is bipartisan and strong on border security. It didn’t have a wall, but it had a lot of things that the security experts say would enhance our border protection."

If there is, indeed, a toughening of border security in exchange for protecting the Dreamers, what does that mean for Vermont, where the feds seem intent on bringing back the unpopular freeway checkpoints far from the border, and where an incident at a Vermont border crossing has become part of a lawsuit filed by the ACLU?

"We’re overdoing it, particularly in Vermont," Welch replied. "Can we make the obvious distinction between the southern border and the northern border? My view is that a lot of things that have been happening in Vermont — distant checkpoints, hassling people, taking their electronic devices — this is a real overreaction that’s reflective of the Trump presidency. I’m very, very concerned about that."

"Concerned" is a popular word whenever Trump goes into "overreaction" mode. Will Welch's concern have any effect, if a DACA agreement results in even harsher security measures inside Vermont? Seems unlikely.